When you go to The Great Gatsby you know you’re going to get a party, and Walterdale Theatre’s production does not disappoint.

Directed by Bethany Hughes and playing until December 15, you’ll walk into Gatsby feeling like a flapper in the 1920s and 105 minutes later you’ll come out reflecting on classism, social media, and image.

The Great Gatsby is an interrupted love story between Jay Gatsby and Daisy Buchanan. Daisy and Jay’s feelings for one another persist, despite being interrupted by the war and Daisy’s decision to marry Tom Buchanan when she didn’t know whether or not Jay would return home from the war. In the years between Daisy’s wedding and the reunion we witness, Daisy’s marriage has become loveless and unfaithful, and Gatsby has worked to join the upper class that Daisy and Tom belong to through bootlegging during Prohibition. This is the 1920s, where Old Money meets New Money: it’s effervescent, booze-fueled, and all about appearances. 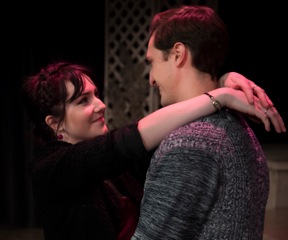 Nick Carraway, Daisy’s distant cousin, is our guide through The Great Gatsby. Played by Simon Pawlowski, Nick is the narrator I never knew I wanted. Simon portrays Nick as awkward and aloof – part of the story but not, a stand-in for the audience. As Nick, Simon gives the audience permission to be swept away by Jake Gatsby – he certainly is. And when the play reaches its inevitable conclusion, Nick is a channel for the despair the audience feels. We’re as swept away by Gatsby as he is and as devastated as he is. I loved the emotional connection to the story that Simon brought to the role of Nick, taking the audience on a

whirlwind ride from hope to despair.

Melenie Reid takes on the role of Daisy Buchanan, both matching Gatsby’s idea of her as this pristine, perfect woman but also playing the role as almost as though she’s drugged, or at least her mind is constantly somewhere else. Through these mannerisms, we get the sense that Daisy is both trapped by and bored with her life, underscored by her hopes for her daughter, revealed early in the play, “that’s the best thing a girl can be in this world, a beautiful little fool”. 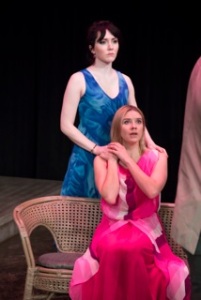 As the title character, Patrick Maloney gives us a charismatic and mysterious Gatsby, with hints of desperation seeping through his polished veneer. Naturally, Gatsby is the character that most underscores the theme of living a life based solely on appearances and outside perception. One of the most tragic moments in the play is realizing that Gatsby and Daisy could have had the life they wanted, had they just stolen away one afternoon, rather than chasing down a social media-worthy moment where Daisy denounces her relationship with Tom.

The Great Gatsby at Walterdale Theatre features a massive cast – twenty actors in total, one of the biggest casts I’ve seen onstage in a long time. The ensemble is strong and cohesive, and so much fun to watch and engage with. As you would expect, there are several dance numbers – and strong dancers in the ensemble that make watching these sections a lot of fun. Wardrobing this cast was no small feat, and Julieanna Lazowski’s many costumes for this huge cast were the perfect physical embodiment of the effervescent, glittering 1920s.

I  have to give a kudos to Kosta Lemermeyer in the role of Meyer Wolfsheim who created a memorable character through his physicality rather than the actual lines spoken by the character, turning a minor character into one that delights each time he is on stage.

One aspect of the show I was surprised by was Rachel Haverkamp’s sound design. The pre-show music was fantastic and creative – a beautiful mix of music from the 1920s and more modern music remixed to give it a 1920s jazz feel. It was timeless and yet perfectly set the stage for this Roaring Twenties story. Yet, I could have used more sound in the actual production itself. The night I attended, the sound felt muted and too quiet for the space (which can definitely happen once you get bodies into a space after rehearsing in an empty theatre) and there were some moments that felt as though they needed sound to set the stage, like outdoor scenes that were silent and could have benefited from ambient sound.

Many themes are woven into The Great Gatsby, but the one this production seemed to centre most around was how we present images of ourselves, regardless of the era we live in. The question is asked of whether you can fake it until you make it, or if you just have to keep faking it. The lines that are drawn at the opening of the play blur, but they never really disappear – by the end of the play, the division between characters of different classes is just as distinct as it was in the beginning. In some ways, the play is also about unringing the bell – or at least trying to. The characters are wrapped up in trying to undo – completely erase – what’s been done in the past. The tragedy of it all makes one reflect on how maybe instead of chasing that picture-perfect life we see all around us, maybe being imperfect is perfect in and of itself.

Simon Levy’s adaptation of The Great Gatsby by F. Scott Fitsgerald runs at Walterdale Theatre (10322 – 83 Avenue) until December 15. Tickets are $18 – $20 at Tix on the Square. On Tuesday, December 11 tickets are pay-what-you-can at the door.