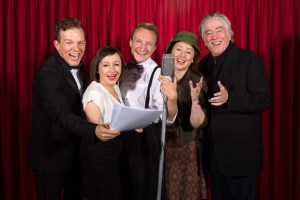 The Adventurous Times of Kevin Grimes by David Belke

An interview with David Belke.

The Adventurous Times of Kevin Grimes is a ten part time travelling radio adventure serial crossing time and space and Edmonton featuring some of the top comic talent in the city. It’s a unique Fringe experience employing the incomparable ability of radio theatre to engage the audience’s imagination in variety show format. The evening will also feature songs, comedy, special guest stars, a contest with an amazing prize from Packrat Louie. But the heart of the show is a one of a kind comedy adventure serial that brings in characters from across history and places a cosmic battle of good and evil right in the City of Champions.

What draws you to using time travel in your plays?

It’s the same attraction as radio theatre; it breaks the boundaries of conventional theatre allowing to literally go anywhere and bring on any character be it a dinosaur, Joan of Arc or Laura Secord’s cow.

Although The Adventurous Times of Kevin Grimes is a radio theatre show, it features the sights and sounds of Edmonton throughout history. How did you dig up these “sights and sounds” and can you describe a favourite that is used in the show?

I let the story drive the settings, but knowing and loving Edmonton as I do I could set my adventure in places as varied as a very thin office in the city hall clock tower to the sewers on the South bank of the North Saskatchewan to the Hub Cap Store on Gateway Boulevard.  But my favourite? Maybe the gathering of bloodthirsty villains below the decks of the Santa Maria in West Edmonton Mall.

We originally did The Adventurous Times of Kevin Grimes at the 2008 Fringe and we had such a good time with it, we knew we were bringing it back eventually. The format was supported by the radio theatre style. Freed from the necessity of memorizing lines and blocking, the actors and the playwright can undertake a really epic story with surprises and twists that live on stage rather than in the physical world. As a writer I find radio theatre to be hugely liberating.

The show features some of the top comedy talent in the city: Kendra Connor, Jason Hardwick, Ryan Parker, Andrea House and Glenn Nelson as well as the inimitable sound designs of Dave Clarke all presented within the cozy confines of the Holy Trinity Anglican Church Sanctuary. It’s first grade performers presenting top of the line entertainment unlike anything else at this year’s Fringe. It’s a hoot!

We are also sponsored by the great folks over at Happy Harbor Comics.