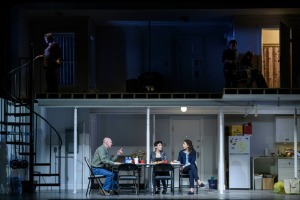 The Humans at the Citadel Theatre. Photo Credit: EPIC Photography.

Stephen Karam’s The Humans shows how families fight and how they love. The deceptively simple title contains both the subject matter and the overarching theme of the story – humans are humans in all their touching and tragic ways.

But, if you must know more, here you are: The Humans is an unflinching look at a stereotypical family Thanksgiving dinner: secrets are revealed, difficulties are discussed and remedies prescribed, and through it all runs the love of a family that’s been through good times and hard. The Blake family has gathered to christen the recently rented New York apartment of daughter Brigid (played by Sara Farb) and her boyfriend (not her husband to Mom’s chagrin), Richard (played by Richard Lee). Parents Erik (Ric Reid) and Deirdre (Laurie Paton) have driven in from Scranton, Pennsylvania with Erik’s mother, Momo (Maralyn Ryan), who is having a “bad day” under the thumb of Alzheimer’s Disease. Elder daughter Aimee (Alana Hawley Purvis) is also part of the crew, under the weather from both a flare-up of ulcerative colitis disease and spending her first holiday in a long time single. The last (though unacknowledged) dinner guest is the audience, who may join the Blakes for dinner at the Citadel Theatre until January 27.

Estimated to run at 90 minutes with no intermission (although the night I saw it, the play was closer to two hours), there is nowhere for the Blake family and Richard to hide – except the bathroom – as Thanksgiving dinner plays out in real time, complete with a meal prepared and served by Richard. Every topic one is “supposed” to avoid – mental health, not succeeding in your profession, religion, money (especially money) is discussed in depth by the Blakes, with everyone weighing in on how they think each other should handle the difficult situations they find themselves in. The characters themselves are not particularly likeable, but they are all unfailingly human, and so we forgive them. 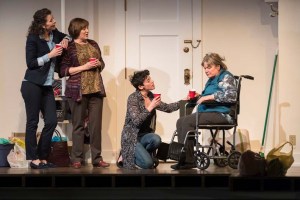 The Blakes find themselves in the underbelly of the American Dream despite trying to follow the rules of the game – being loyal to one’s employer, trusting the Lord to provide, following your passions & dreams, and getting a “good” job. Instead, they each find themselves trapped in one of the negative outcomes of chasing that dream – facing financial uncertainty, eating their feelings, buried in mounds of student debt, or having to decide between their health and their job. As the outsider from an upper-class family, Richard is separated from the Blakes not just by his circumstances (two years away from inheriting a “small trust fund”) but also in terms of his attitude to the situation. For him, hope remains, whereas the Blake family seems to be looking at hope in the rearview mirror. Despite the misfortune, hurt, and depression that permeates the play, the family’s love for each other shines through and we know that’s what will carry this family – and all the other middle-class families it represents – through the difficult times.

By the nature of the play, Director Jackie Maxwell’s cast has to act like an ensemble and they deliver. I don’t know that I’ve seen a more familial cast, achieved through subtle moments of a look, a gesture, or a small moment as cast members communicate without words. While the pacing seemed off at the opening night performance – rushed and drawn-out in not quite the right places – hopefully, this will iron itself out throughout the run. In particular, Ric Reid’s portrayal of patriarch Erik – a middle-class man, without much education but a lot of loyalty to his religion, employer, and way of life – is particularly striking. His demeanour alone shows that this is a broken man, whose systems he’s believed in all of his life have failed him and left him not knowing where to turn. Alana Hawley Purvis is heartbreaking as Aimee Blake, the daughter who’s supposed to have it all together but doesn’t. Her conversation with her ex-girlfriend will leave you with flashbacks to your last breakup. Sara Farb’s portrayal of Brigid Blake, working two bartending jobs to pay off student debts from her composition degree, leaves us understanding more of modern-day pressures of big-city living: eat organic, put your health first at any cost, put on a show that you’re living your best life, and somehow try to afford it all.

Once you understand that the point of The Humans is to observe people being just that, it’s easy to sit back and watch the sad comedy unfold. There is no larger lesson lurking in the closets of Brigid and Richard’s apartment, just that for the most part, people do the best with what they are given.