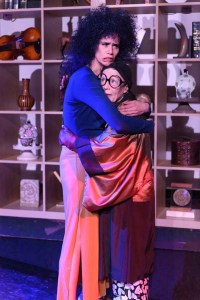 The saying goes that there’s nothing that time can’t fix. In the case of Bryony Lavery’s Origin of the Species, all hopes are pinned on a 4,000,000 woman brought back to life with a kiss after her skeleton was found on an archeological dig in the Olduvai Gorge. Molly, the archeologist who breathes life back into the woman, names her Victoria (after Molly’s grandmother) and brings her back to England and teaches her about being a woman in the 21st century and learns something of our ancestors along the way.

Origin of the Species opens Northern Light Theatre’s season and runs until October 27 in the Studio Theatre of the ATB Financial Arts Barns and stars Holly Turner as Molly the archeologist and Kristen Johnston as Victoria.

Kiidra Duhault’s sound design focuses the audience’s attention on time from the moment one steps into the theatre: the pre-show sound design is simply the ticking of a clock. As the rest of the set is illuminated, we see shelves upon shelves of artifacts and items collected by a sophisticated, well-travelled intellectual. And finally, our narrator Molly arrives in all her unhurried glory, composedly welcoming us to her New Year’s Eve celebration, picking up a book illustrating the history of our universe would look like if it was compressed into 12 months (kind of like this). January 1: the big bang. Then a lot of nothing… March – the milky way is formed. Eventually, we make our way to four minutes to midnight on the last day of the year, when the first beings we would recognize as human appear. Molly’s point is this: in the context of the history of time, ours is not a long history.

But as Molly discovers more about Victoria, she discovers history is in the eye of the person who records it. The play asks the audience to look at how history is written and by who. Victoria tells Molly that she discovered fire (taken from a volcano), figured out how to use stones as tools, and even created and used weapons – not “man” as Molly has been taught. 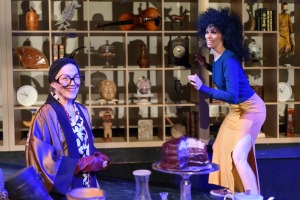 Origin of the Species is about time and evolution and the question if on the cosmic calendar, humankind will make it to midnight on New Year’s Eve or if we will destroy ourselves in the process. Under Molly’s tutelage, Victoria evolves from the earliest of hominids to a modern-day woman, sending her out into the world at 4 minutes to midnight to save humankind, armed with the English language, imagination, love, a knowledge of history, and a love of learning. Are these the tools that will save humankind? Playwright Bryony Lavery leaves the audience to fill in the answers.

While I was engaged throughout the whole performance, the play ends on a less satisfying note than it began. I think what the playwright and production team are trying to do is match the pacing of the show with the pacing of the cosmic calendar – slow, with lots of breathing space at first and the plot accelerating as the play continues on until the final moments of the play are delivered in rapid succession. I love this conceptual parallel to the evolutionary timeline the play references but found the ending hard to follow and a little unsatisfying.

Kristen Johnston plays many versions of Victoria as she evolves through the ages, from a hunched-over hominid, dragging her knuckles across the floor to a fully articulate and intelligent homo sapiens. What’s beautiful about her performance is how subtle she is as she evolves in her physical, oral, and conceptual expression of her character.

The role of Molly seems written for Holly Turner (who we saw with Northern Light theatre in last year’s The Testament of Mary). As Molly, Holly is quirky, dainty, but firm.  She has the mystical air of one who has seen a lot more than the rest of us and is gracing us with a story to close out the final moments of the year. And what a story it is, pregnant with potential for the coming year.

Origin of the Species runs at the Studio Theatre at the ATB Financial Arts Barns until October 27. Tickets are $26.25 – $31.50 through Northern Light Theatre’s Box Office.