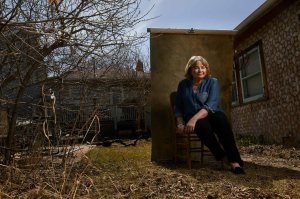 They say the third time is the charm. At least Terry Mire hopes it is as he waits for his dog Buddy to come back to life after dying for the third time in Collin Doyle’s latest, Terry and the Dog.

Collin says Terry (played by Robert Benz), a recovering alcoholic in his 60s, is “trying to find meaning because his dog has died for the third time. He tells the stories of the previous times his dog has died and why they happened and when they happened. He also tells a story about his wife, who takes him back after he’s been sober for quite a while. He tells a story about his son who wanted nothing to do with his dad, but eventually forgives him.”

Collin has been writing the play on and off since 2005, punctuated by several public and private readings facilitated by Workshop West Playwright’s Theatre. When Dave Horak and Edmonton Actors Theatre approached Collin to bring the show to life, Collin jumped at the opportunity to work with him. “I really admire Dave Horak as a director – I think he’s incredible. One of the reasons I wanted to work with him was because of Stupid F@#king Bird last year. That play blew me away, I thought it was the best thing I’d seen in years. It was incredible… He gives a permission in the room for actors to explore things.” 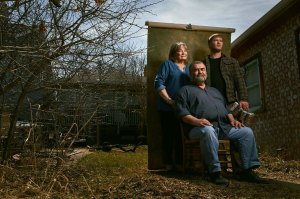 Amongst all the darkness though, is Collin’s classic humour – it’s not all doom and gloom and dead dogs. “If you’re going to write a dark play, you need to have some comedy in it to let people into the play before you can go to the dark areas. The comedy comes from Terry and his wife as they come back together as a couple and their conversations. It comes from this weird situation of this dog that keeps coming back to life. There are comedy and sweetness sprinkled throughout. The play is a love story between Terry and his wife and I think that helps before we get to the dark stuff.”