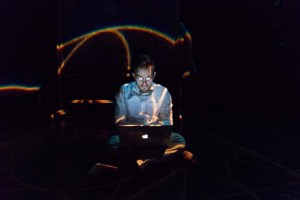 For theatre-goers, the contradictory ideas that time is both real and a construct are on display every time we’re at the theatre. We can traverse 200 years in a play and yet emerge from the theatre three and a half hours later.

This idea that time is both malleable and fixed is at the centre of Hannah Moscovitch’s Infinity, which makes it’s Western Canadian première as the finalé of Theatre Network’s 2017/2018 season. As Hannah says in an interview published in the show’s program, the play is a result of Ross Manson and Volcano‘s commission asking her to write a play about time. To do so, she found her focus on “the relationship between time and ambition, time and love, and time and death”.

At the centre of Infinity are three characters passionate to the point of obsession about their chosen field: physicist Elliot (Ryan Parker), violinist Carmen (Larissa Pohoreski), and mathematician Sarah Jean (Cayley Thomas). All three are most alive when speaking about and working in their respective fields, and yet all fight loneliness by reaching out for love that they reciprocate to varying degrees of success.

To start the play, we encounter the distraught and confused Sarah Jean who joins us from a funeral but is more preoccupied with trying to prove that she is not, as her friend has said, fucked up about love. That she’s normal. She launches into a series of stories to prove her point, that really are more snippets of sexual encounters with men who express love to her, but which she doesn’t really tell us about her reciprocation of it. 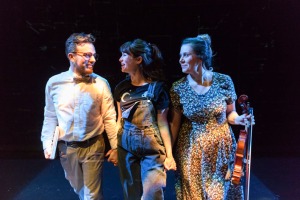 Interspersed with Sarah Jean’s attempts to convince us that she has been in a totally normal loving relationship, we see the evolution of Elliot and Carmen’s love story. When the two meet at a party, he tells her she’s the prettiest woman there, she tells him she just broke up with her fiancé and can offer him a ratio of 20 minutes of sex to 45 minutes of crying. The two begin a relationship that is accelerated by carrying an unplanned pregnancy to term. Over the course of the play, the stories of Sarah Jean and Elliot & Carmen start to intersect. Elliot and Carmen’s marriage is one filled with more unhappiness than happiness – or at least that’s what we’re shown on stage. Both being obsessive about their field of study, parental duties mean that the family cannot be simultaneously happy – either one or both parents are torn away from their work by parenting a child who ends up being equally talented at string theory and string instruments.

Scene changes are punctuated by haunting violin music written by Njo Kong Kie and performed by Lariss Pohoreski. The play itself is somewhat discontinuous, taking passing months or years by leaps and bounds with each scene change. The fits and starts the play is told in mirrors the disconnection between all three characters. The action of the play revolves around the characters’ search for love and belief that they have it in one another even while they continuously hurt each other (whether on purpose or not).

As Elliot, Ryan Parker brings to life Elliot’s complex relationship with his subject matter: while his passion for theoretical physics is apparent, so too is his underlying drive to prove to the world and his mother that she made the right decision not to abort him as a fetus. The role of Carmen is a difficult one – I wish the role had been written as a fuller character, rather than just how Carmen exists in relation to Elliot and Sarah Jean. Larissa admirably performs Carmen’s attempts to run away from the pervasive loneliness and feelings of inadequacy that began in childhood and drive her decisions. There were some moments of true connection between Elliot and Carmen, but I wish I could have seen the underlying love the two characters had for one another more often in the play. Instead, I mostly felt the primal fear of failure that drove Elliot and Carmen into each other’s arms, despite the themes of the play telling me that it was love that was keeping them there.

As Sarah Jean, Cayley Thomas portrays the difficult position many find themselves in – being torn between wanting to be normal versus expressing one’s talents; trusting your brain versus trusting your gut; choosing intellect or emotion. As a young woman, trying to navigate these choices, Cayley perfectly portrays the enigma that is the millennial experience.

Ultimately, whether you believe love, time or any other abstract concept is real is key to how you interact with the world and those in it. Infinity shows that belief is one we each must make for ourselves.

Infinity runs at The Roxy on Gateway until May 6. Tickets are $26 – $30 through the Theatre Network box office. Special events include two-for-one ticket Tuesdays on April 24 and May 1 and a talk-back with the cast on Saturday, April 28.