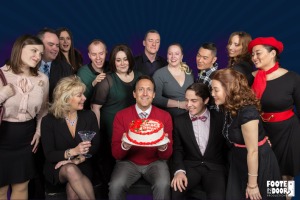 Ahhh, spring is (almost) in the air. What better time for Foote in the Door Productions to bring Stephen Sondheim and George Furth’s musical Company to the stage – a musical of self-exploration and insight into the intricacies of romantic relationships, running April 20 – 28?

Company centres around Robert (played by Russ Farmer), a 35-year-old single New Yorker whose life is full of engaged and married couples. Set to the background of Robert’s 35th birthday, a series of vignettes showcase the extreme moments of his friend’s relationships through Robert’s eyes as he grapples with the question of whether he should give up his bachelor life.

Morgan Kunitz, who directs Company, says, “It’s a hilarious musical. Each relationship has a fatal flaw, but each gets a moment where they’re still very much attracted to each other and in love. Within their own relationships, the characters are so opposite and insecure. People can be in love and hate each other at the same time and that creates a lot of humour… The couples almost act out when he’s there. They play up their insecurities more when he’s around – it’s like couples therapy, they get things off their chest, but that creates a lot of humour.”

Meanwhile, surrounded by couples who love him and give him varying insights into what love and relationships can be, Robert himself is “looking for the perfect person and the perfect circumstance and, as a result, probably misses out on opportunities that would’ve been great.” says Russ Farmer who plays Robert. “I don’t think he likes the self-discovery and self-exploration of being alone. He likes to be in groups of people and constantly surrounds himself to make sure he doesn’t need to be introspective… The journey for him in the show is the process of self-discovery and making himself open to being with another person, which involves a certain amount of self-awareness.”

Company is a concept musical, with the story told through a series of vignettes showing Robert and his friends, which Morgan says allows the audience to observe snippets of each character and make up their own minds about the couple or relationship without giving away the ending of the musical. Morgan also says the strong roles for women also drew her to the musical when Foote in the Door approached her about directing this season. “The guys feature of course, but I would say it’s a women-focused musical. Even though Robert is the lead and onstage the whole time, the play shows strong female characters and, being that it’s from the 1970s, that’s pretty groundbreaking. At the time, you had your ingénue and a vamp and maybe if you’re lucky a grandma. In Company, everybody gets their moment and specifically the women as well.”

While Company opened on Broadway in 1970, it was important to Russ (who is also one of Foote in the Door’s founders) and Morgan that the show not feel like it was rooted in the 1970s. Russ says, “We didn’t change the time period. He wrote it for the current day, and we’ve kept it in the current day.”

Morgan adds, “I think it’s still relevant today, with fewer people getting married there is more focus on being single and marriage is less important than it was 15 – 20 years ago. It’s actually even more relevant now, as some people still struggle with the idea of thinking you should get married and have kids… The musical can be taken as saying that being in a relationship is the most important thing, that being loved is being alive. I don’t fundamentally believe that, so we’ve had to be careful to show that knowing and being yourself is being alive and being in love can be a factor in that, but having someone is not what makes you whole.

Get the best of what’s on in Edmonton’s theatres – along with a healthy dose of great reads and listens – by signing up for my weekly(ish) newsletter.