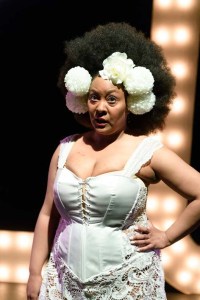 I’ve said it to insult, to joke, to shame, to celebrate, and as a political act of reclamation. I have a complicated relationship with the word slut, and there’s no escaping the echoes of all the times I’ve said it as its four letters dominate the stage in all their lit up glory in Northern Light Theatre’s season closer: Brenda McFarlane’s Slut.

In Slut, we meet the confused, hurt, and defensive Matilda (played by Michelle Todd), who is being held in jail on charges of running an illegal brothel. Totally bewildered, Mathilda insists that all she wants to do is enjoy being single, experiencing physical and emotional intimacy for a short time without any long-term commitment. However, Matilda is enlightened by the police, a sex addictions therapist, call girls sharing a cell with her, and society at large that women always need an emotional connection or love to have sex and that it’s impossible for her to be “giving away” sex without being in love or being paid.

Trevor Schmidt’s set design of big block letters reading SLUT lit up by flashing light bulbs might be my favourite set design of the season, if for no other reason than how it confronts the audience – it’s clear this play leaves no room to hide. I also really enjoyed the contrast of the Slut set design with the set design of Northern Light Theatre’s season opener The Testament of Mary, which used light and string to separate the audience from the performer. As NLT’s season has progressed, there is less and less for the characters – and the audience – to hide behind. Beth Dart’s lighting design complements Trevor’s set design perfectly, adding directionality and depth to the set and in some sense acting as a stand-in for the characters that Mathilda portrays.

As Mathilda is compelled to defend her sex life, Brenda McFarlane’s script that marries the personal with the political and Michelle Todd’s delivery that oscillates from guilt to anger left me thinking about the roots of the current state of sexual politics today.

As is noted in Northern Light Theatre’s program, the thrust of the company’s 2018/2019 season is the idea of the Madonna-whore complex first identified by Sigmund Freud, which basically says that men with the complex view women either as either pure and perfect Madonnas or debased whores. That men with this complex can’t view women as a respected partner who enjoys sex. The season opened with The Testament of Mary, which humanized the Madonna, followed with Do This in Memory of Me, where a young girl confronts gender stereotypes and now finishes with Slut.

The combination of these plays, combined with the conflicted feelings I have about the word slut left me thinking about the roots of slut-shaming, and specifically the fear it’s rooted in.

Fear that there’s not enough love to go around.

Fear that the love we feel entitled to will be given to someone else.

Fear that equality for men and women means loss of power. 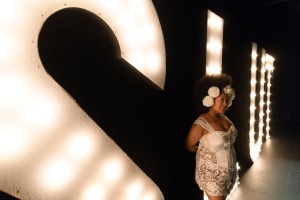 And because of those fears, generations and generations of people have constructed systems where, as Mathilda says, “men withhold love and women withhold sex” and ultimately no one is able to express themselves fully. Slut comes at a time when the struggle over who has power over a woman’s body has never been louder.

In the role of Mathilda (and every other person she meets in the events leading up to and during her imprisonment), Michelle Todd plays an interesting mix of the ingénue and the vamp. She’s sweet, a little naïve, and has a problem with wanting people to like her. But, she’s also proud of her sexuality and doesn’t hesitate to lash out and yell when she feels her point isn’t getting across. Michelle marries these two archetypes into a character who you want nothing more than to be her best friend (and bail her out of jail!). In doing so, Michelle perfectly embodies the tightrope the modern woman must walk: don’t be too sexual or you’ll be labelled a whore; don’t be too virginal or you’ll be labelled a prude.