The weather may have been up and down this winter, but SkirtsAfire Festival is planning on heating up Edmonton’s arts scene with a diverse lineup of female-powered artists. Now in its sixth year, SkirtsAfire Festival is a multidisciplinary arts festival focused on showcasing female artists across theatre, dance, music, visual arts, poetry, prose, spoken word and more.

However, Festival Director Annette Loiselle says there’s a lot more to SkirtsAfire than might meet the eye. “It’s not just a festival for women, it’s a festival for everyone. It’s not just a theatre festival, it showcases all artists. We’re not just a feminist organization, we’re a festival and we have so many things going on in the festival. Quite often people have said we should be more focused, but I think it’s okay to be ‘multi’ and dabble in a bit of everything and throw it up and see what comes out.”

Annette says the idea she kept coming back to as she was programming the festival was “diverse and daring”, which comes directly from SkirtsAfire’s new vision. As a result, Annette says the festival is telling the widest cross-section of women’s stories in its history, with over 100 artists being part of this year’s festival.

“[Programming] starts with submissions in June and July and, the festival is built as we go. One of the things I started to see was a lot of Indigenous artists… I wanted to bring people together. I knew I wanted to have Lana Whiskeyjack as a curator because I love her ideas and the things that she advocates for in her communities. I also wanted to program Stephanie Harpe, since she is an advocate for missing and murdered Indigenous women… she is an incredible voice for women and happens to be a singer-songwriter and an actor and I knew we needed to have her voice in the festival so she will be featured in Words Unzipped, which is programmed by Nasra Adem.” 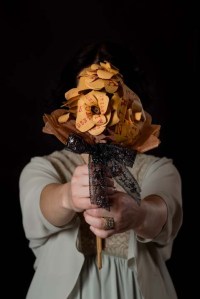 Trina Davies’ The Romeo Initiative is SkirtsAfire’s mainstage production (running March 1 – 11), telling the story of East German spies who were assigned to have relationships with West German secretaries as part of Stasi espionage plans. Annette says, “The opening scene is so romantic, and I love that. But then you go on a journey of ickiness and reality. I love that you start with this incredible romance, and you really don’t know where it’s going to go. You don’t know who is the good guy and you don’t know if the East German spy actually loves her or not – I think some people will think he does and some people will say no, he’s just a spy.”

This year’s festival will also feature the unusual combination of a clown show on the topic of depression, Silenced by Morgan Nadeau. Annette says Silenced is “a bit of an experiment… I think depression is a very important topic right now, I see it with my kids and what they’re dealing with in the day-to-day in school and anxiety, depression, mental health with teens, in particular, is so huge right now.  We’re talking about it more but people still don’t really understand it so I wanted to bring in Silenced. The fact that it’s a clown show makes it more palatable for people who don’t want to see a show about depression.”

Of course, SkirtsAfire also has a focus on developing new work and artists and continues to do so through the Peep Show. This year, the Peep Show will feature 27/37 by Bevin Dooley, about two twin sisters – one of which is facing death, and In the Place of Stars by Christine Lesiak, an adaptation of Antoine de Saint-Exupéry’s novella, “The Little Prince”.

One of the best parts about SkirtsAfire Festival is the wide range of artists audiences can see all in one weekend. Check out the festival’s website for more details about the events, including the visual art exhibit and The Romeo Initiative, which run March 1 – 11. The festival opens on March 8, International Women’s Day, and runs until March 11.

Learn more about The Romeo Initiative, read my interview with director Nancy McAlear.