It seems like it could be a work of fiction: you meet your ideal partner and everything about them checks your boxes: the way they look, their profession, the way they conduct themselves. It’s as if they’ve been made exactly for you. And then one day you find yourself on trial for espionage because it turns out the person you dated or even married, was only in it to seduce you and in doing so, getting you to hand over state secrets.

Except it’s not a work of fiction – it’s something real women experienced in West Germany during the Cold War, having been targeted by East German Stasi “Romeos”.

Conceived by Markus Wolf, former head of East Germany’s foreign intelligence service, the Stasi Romeo network was responsible for preying upon lonely female West German government workers to gain access to their work. In this larger-than-life historical story, Trina Davies’ The Romeo Initiative tells the fictional story of Karin Maynard, who is seduced by the spy Markus Richter. The Romeo Initiative has its Edmonton première March 1- 11 at the Alberta Avenue Community League as part of the SkirtsAfire Festival.

Director Nancy McAlear signed on to this production soon after SkirtAfire Festival Director Annette Loiselle approached her with the script, knowing she had to be part of bringing this intriguing play by former Edmontonian Trina Davies, to life. Nancy says the play “can sweep you up in the romance of what’s happening to this woman and then shines a very harsh light on it. It makes it more interesting because as much as everyone loves a romance, it’s interesting to see the ugly underbelly of that as well… [The program] went on for years. There were some of these secretaries who were in a relationship with someone for 18 years, thinking they were married, thinking they were in love and had this amazing relationship, but it turned out the men had whole other lives in East Germany and were literally hired to be with them.”

Themes of trust and betrayal are at the core of The Romeo Initiative, in part spurred on by the unique format Trina Davies uses, which allows the audience to experience the story from the perspectives of both Markus and Karin. Nancy says, “One of the things that’s great about the play is that even though you know where it’s going, you see similar themes more than once. The audience will see them first from our main female character’s point of view. It’s almost a romantic film from the 1970s and then once you get more and more information, you see some of those things again but coloured with new information.” 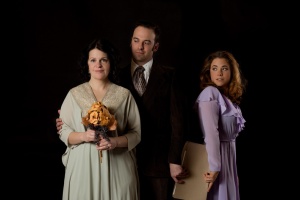 Nancy says Trina has created characters (played by Sarah Feutl, Heather Cant and Aaron Hursh) that are so fully fleshed out it is easy to understand their motivations for responding the way they do in the situation. “We have Karin, our West German secretary. One of the things mentioned in the play is that in the 1970s in Germany, there were not a lot of eligible men, so as a woman who is possibly a little unassuming, she keeps to herself, she’s intelligent and she does her job. She isn’t a flashy individual and she’s resigned herself to the fact that her chances of finding someone to share her life with are slim. There were many women like that at the time, who had these romantic visions of what their life could be, but knew that they probably weren’t going to have that. So, they put their nose to the grindstone, did their jobs and just had their life.”

When Karin “accidentally” meets Markus while on vacation, Nancy explains, “she thinks it’s too good to be true. She basically can’t believe she’s met someone who keeps showing up. She doubts it but then falls into it because he’s always there.”

The play is rounded out by the third character, Lana – the mistress of Karin’s boss who also can’t quite believe that Markus is interested in Karin and pries at the cracks she sees in their relationship.

As to what audiences might walk away with, Nancy says, “I don’t want people to necessarily question their own relationships, but I hope that they leave with questions… [The play] says that we should never close ourselves off to love. We should always be open to love but always enter into love with open eyes and an open heart.”

The Romeo Initiative plays as the mainstage production of SkirtsAfire Festival March 1 – 11 in the Alberta Avenue Community League. Tickets March 1 – 7 are $17 -$22 through Tix on the Square and pay-what-you-can at the door March 8 – 11.