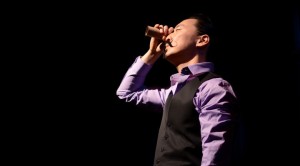 Tetsuro Shigematsu in Empire of the Son. — Photo by Raymond Shum.

What do you do when your dying father has a personal tie to many important events and people of the twentieth century, like the atomic bombing of Hiroshima, Marilyn Monroe singing ‘Happy Birthday’ to JFK, even Queen Elizabeth by way of a shared high tea, yet your relationship with him is so distant that you’ve never really heard these accounts?

For Canadian broadcaster, comedian, filmmaker and playwright Tetsuro Shigematsu, it was a chance for him to try to move past the years he spent not liking his father very much (as he says at the top of the show), and start to ask questions about his father’s life and how he interpreted the things he witnessed. Empire of the Son is the story of trying to understand one’s father from the perspective of a son, a father to his own two children, and eventually as a caregiver to his father prior to his death. Playing in The Club at the Citadel Theatre until February 18, Empire of the Son will leave you both delighted and moved.

It is apparent as soon as Tetsuro walks on stage that he is a natural-born storyteller. The father-son conflict at the centre of Empire of the Son immediately captures your attention, as Tetsuro bobs and weaves through stories of his childhood, teenage years and adulthood trying to understand his father. Together with a veritable crew of designers, consultants, and dramaturgs, Tetsuro has integrated video, audio, memorabilia from his father’s life, and object theatre to create a play much larger than the one-person show Empire of the Son appears to be at first glance. 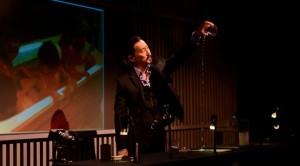 Tetsuro Shigematsu in Empire of the Son. — Photo by Raymond Shum.

Particularly effective in telling this story is a table the team behind Empire of the Son has created to outfitted with various lights, sceneries and miniatures so that Tetsuro can use object theatre to transport us to Hiroshima, a skating rink, his teenage room, and more. A camera is set up to live stream Tetsuro’s manipulation of the miniatures, his fingers, and other props onto a large screen built into the set, adding an engaging visual element to the otherwise unchanging visuals one-person shows sometimes fall into. In particular, the way the mushroom cloud that consumes Hiroshima is portrayed through the use of a cloudy substance shot into a tank of water is a surprising replica of the footage most have seen.

At its heart, Empire of the Son is a deeply personal exploration of the realization that every story has two sides. It’s a story of arriving firmly in the realm of adulthood through the discovery of one’s own parent as a whole person with experiences, regrets, motivations, and constraints that you might never understand. But, in the gap between his knowledge and his father’s lived experience, Tetsuro shows us how one might try to bridge the gap years of distance can cause and build an understanding that is acceptable, despite its incompleteness. After all, as Tetsuro eloquently closes, the matter that’s on this earth is the same as its been since the earth was formed, so we are never really that far apart from our loved ones, despite – and because of – what happens to our physical bodies.

Empire of the Son plays in The Club at the Citadel Theatre until February 18. Tickets are $30 – $97 through the Citadel’s Box Office.