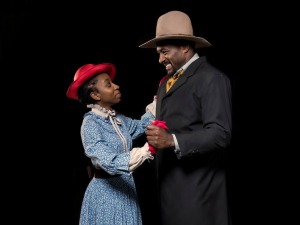 Set primarily in rural Alberta in the late 1800s/early 1900s and Calgary in the 1960s, John Ware Reimagined tells the story of John Ware – one of the founders of Alberta’s ranching industry – and Joni – a fictional young girl who grows up in Calgary. In scenes that alternate between the two settings, we learn about the life and love of John Ware and the little girl who had a hard time reconciling her two halves – one as a Black Canadian, the other as a horse-crazy girl – until she encounters the legendary Black cowboy, John Ware. John Ware Reimagined plays at the Backstage Theatre until November 19.

John Ware’s story is larger than life. Born a slave in South Carolina, he was part of the first large drive bringing cattle to Alberta and ultimately one of the founders of ranching in Alberta. Numerous legends surrounded John Ware – there wasn’t a horse he couldn’t ride, he breathed life back into his infant daughter, he created and popularized steer wrestling (now one of the staples of any rodeo). But, the impression playwright Cheryl Foggo leaves us with is that the legends are secondary to who John Ware was as a person.

John Ware Reimagined is an intensely personal story, almost to the point where you can forget the legend surrounding the man. While the legends surrounding John are interwoven in the story, all of this is secondary to the love story between him and Mildred Lewis. Played by Jesse Lipscombe (John Ware) and Jameela McNeil (Mildred Lewis), the play shows the magic that happens when two people are completely spellbound by one another, giving up what they thought their plans were in search of building a life together. One of my favourite moments of the play was a date between John and Mildred where Jesse drops his tough cowboy demeanour and is struck speechless, shy and inept by the attraction he feels to Mildred. As Mildred, Jameela McNeil is a calm, collected portrait of the conflict between wanting to pursue one’s own dreams and being swept away by love and duty to family that women have faced for ages. 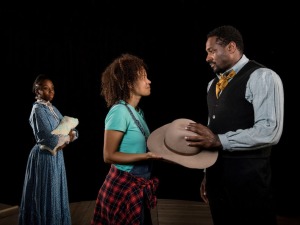 Kirsten Alter brings to life the spirited, conflicted Joni, who Cheryl Foggo has said is based loosely on her own experience of growing up in a Calgary that she loved, but did not reflect and celebrate people who looked like her. As we watch Joni grow up, we see her try to reconcile what she sees as two halves of her identity – one as a Black Calgarian, the other as a lover of horses, the Stampede, and all things “cowboy”. The racism she experiences and the absence of people to look up to who “look like her” leaves Joni feeling out of place in the city she loves and calls home. Until she comes across John Ware’s story, later finding out he was Black. Ware quickly becomes Joni’s hero, and it’s clear to see that finding someone like her helps Joni start to find her place in the world.  Although Kirsten plays Joni not as a child, but as an adult’s remembrance of a child, her energy and exuberance help the audience form a connection with this child. Through Joni’s eyes, it’s easy to see (if you don’t already) why telling diverse stories that help people find heroes who look like them is so important.

From what I’ve read of Cheryl’s journey to find out about John Ware (and what is portrayed in John Ware Reimagined) it was almost by happenstance that Cheryl first came across John’s story, despite John Ware being instrumental in Alberta’s ranching industry. As Joni says in the play when she looks at The Big Four Building at the Stampede Grounds, John Ware is important enough to Alberta’s history that he should be part of the four who are memorialized there. Yet, racism and privileging white stories over others have led to stories like John Ware’s being suppressed. To help audiences learn more about John Ware, ranching, being Black in Alberta and the community of Amber Valley (one of the first all-Black settlements in Canada) a donation from the Harry and Martha Cohen Foundation has enabled Workshop West to put together an extensive enrichment guide to accompany John Ware Reimagined. As I was poking around the enrichment guide, I was shocked to find out that the town where I went to high school was one of the towns in Western Canada where Black farmers and business people settled, fleeing oppression in America. While, of course, not every part of history can be taught in high school, realizing the complete omission of this history from my high school education really shone a light on why John Ware Reimagined is such an important story to tell.

John Ware Reimagined plays at the Backstage Theatre until November 19. Tickets are $24.50 – $27.50 through Tix on the Square. As usual, Workshop West has planned an accompanying Salon Series for John Ware Reimagined, the remaining dates of which are: