When one starts researching a topic of interest, the discovery of the limitations of school curricula is often quick. Take, for example, the history of Western Canada that I was taught, which completely skipped over the Black pioneers who came to Canada from the United States, fleeing racism and violence and settled to re-start their lives as farmers and businesspeople. 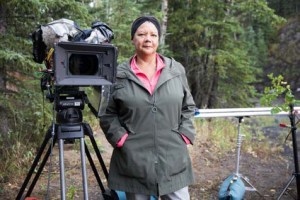 One of these settlers was John Ware, who brought the first cattle to Alberta to Southern Alberta in 1882, had the reputation as the most skilled horseman on the Prairies, and popularized steer wrestling. Born a slave in South Carolina, John Ware shaped Alberta’s history and yet many Albertans are not familiar with him. Through her play, John Ware Reimagined, and an upcoming documentary, John Ware Reclaimed, writer Cheryl Foggo keeps the memory of John Ware alive and brings his story to Albertans who may not have previously encountered it.

November 8 – 19, John Ware Reimagined will take to the Backstage Theatre as Workshop West’s opening play of their 2017/2018 season. Told through the eyes of a young Black girl named Joni, John Ware Reimagined humanizes this larger-than-life historical figure and the love of his life, Mildred Lewis.

Actor and activist behind #makeitawkward, Jesse Lipscombe has been involved in play since an early workshop, plays John Ware in the upcoming Workshop West production and has a personal connection to the subject matter: “One of John Ware’s children married a Lipscombe, and my Dad’s side of the family actually comes from Amber Valley as well, so a lot of it hits home for me… It’s been an unbelievable experience for me and a walk through history as I learn about him and my own ancestors and how they arrived here in Alberta… I’m always an advocate for telling important stories that need to be told, specifically African American or African Canadian stories that are often overlooked or missed as a result of not being taught them in school. John Ware’s story specifically resonated with me a lot in the ideas of his absolute hate for fences and rules and the idea of living a life with open space and endless possibilities – that’s how I like to live my own life as well. When you play a character with this much weight, it definitely affects your own outlook on life and I wanted to be a part of keeping him alive. I heard a quote that I’m paraphrasing – a person dies twice. Once when they breathe their last breath, and the second time when someone speaks your name for the last time. I wanted to be part of keeping Cheryl’s dream of keeping John Ware alive for as long as possible.”

Jameela McNeil, a recent Grant MacEwan University graduate plays Mildred Lewis, John Ware’s wife, agrees: “I was not familiar with John Ware at all, this has been a great history lesson through the process. It’s been a wonderful discovery because I think there are a lot of Black Canadians that don’t know about our history here, so it’s been great to learn more about what’s going on for us and people in our community… I did not learn about anything during school that had to do with Black Canadians or Black history at all. So, now I’m getting that history lesson. Also, the characters are beautiful, diverse characters that their ambition, drive and perseverance are still inspiring. And to know they are regular human beings, there’s nothing too fancy about them but they are heroes.”

Jameela adds, “Cheryl reminds us that heroes come in so many different shapes and sizes. Your hero could be your neighbour or someone you don’t even know. I think at the end of the day anyone can be a hero because it’s just how you live your life, everything you do for others, the example that you set.”

The two agree that while the lives of John and Mildred seem incredible, Cheryl has done a great job of humanizing these characters into flesh and blood people, especially through the love story that is at the centre of the play. Jameela says, “In the end, it is about love and how love conquers all.”

“Mildred is from Toronto and comes from a very strong community of Black people in Toronto and the city life. When we meet her, she has just moved to Alberta and it’s definitely a culture shock for her. On her journey, we see how she meets John and how she struggles with her dreams, meets the love of her life and a choice that she has to make. We see the sacrifices she has to make and the aspirations she has. ”

The love story is also one of the key themes of John Ware Reimagined that stands out to Jesse. “This is such a pure love story. Take away all of the mythology and at the heart of this is love and what you’ll do for the person you’ve committed your life to. When it’s real and true, it’s more powerful than anything you can imagine… [At the beginning John] is very clear about the phases of his life and what his aspirations are until they are hijacked by the most beautiful woman he’s ever met in his life when he meets Mildred. Love really shakes things up and put things in perspective what’s important.”

For both Jesse and Jameela, John Ware Reimagined brings up not just a look at the past, but also the present and future situations of marginalized communities in Canada. Jesse says, “The idea of him being at such a disadvantage resembles the majority of marginalized communities today. This play still relates to life as it is right now. As much as we say it’s changed, a Black man, a Muslim woman, you pick any of them, they’re still at a disadvantage and the work still has to be done. Even though we’ve seen so much progress, there’s so much work left to do. It’s a reminder and a mirror as much as it is a look into the past.”

Jameela adds, “I believe that history does repeat itself and [the play is] a reminder that the work’s not done. We still have a lot of work to do and now we’re having a conversation. That’s what this play really does, it opens us up to having a conversation, letting people know what has gone on in the past, because some people don’t even know, and now I hope we can have more discussions and work on healing.”

John Ware Reimagined by Cheryl Foggo runs at the Backstage Theatre November 8 – 19. Tickets are $24.50 – $27.50 through Tix on the Square. As usual, Workshop West has planned an accompanying Salon Series for John Ware Reimagined, the dates of which are: