The thing with stories is that there’s always another side. And usually, one side is more often heard or believed because of a power imbalance. In Colm Tóibín‘s The Testament of Mary, an untold side of the story of Jesus – from the point of view of his mother – is put on centre stage.

In The Testament of Mary, Mary tells her versions of key events like the crucifixion, the raising of Lazarus, and turning water into wine. She also questions his death and divinity. The much-debated text – which takes the form of both a novella published in 2012 as well as a 2013 play – takes to the stage as Northern Light Theatre’s season opener October 26 – November 4. 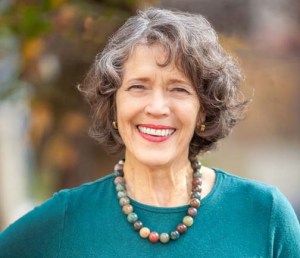 Holly Turner, who stars as Mary, brought the script to NLT’s Artistic Director, Trevor Schmidt a few years ago, wanting to see it’s Alberta première. Asked what it was that spoke to her about the script, she says, “I like that the play itself is a really unconventional take on a really conventional story. There’s a great arc for the character in it, so it makes it a lot of fun to play.”

Trevor says Holly’s passion for it was what sold him on the show, having worked with seven years prior in Northern Light’s The Busy World is Hushed. However, presenting The Testament of Mary also continues along a path of increasing the number of women in key roles and examining the place of women in religion that Northern Light Theatre has included in previous seasons, through critically-received shows like The Pink Unicorn and The Good Bride. Trevor says, “There’s a huge discussion being had in the theatre community around diversity and inclusion, and the idea that women’s roles need to be more than the mother or the girlfriend. In the biblical version, Mary is the mother. That’s it. Her story is told in relation to the son. This is a very distinct, interesting story told from her side of view – it’s her version of the truth that’s being told… I’m interested in doing these plays because they speak to the position of women within religion. My goal is always to approach it with respect and to open up a dialogue about women their place in religion and religious society. I hope it causes people to have dialogue and discussion about that because I think that’s really important.”

Because of The Testament of Mary‘s portrayal of Mary, many productions have been protested by members of the Catholic Church and other religious groups, and the Rosary Rally of Edmonton has already applied to protest at the Edmonton production as well. Because dialogue about the subjects Northern Light Theatre’s shows engender (talk-backs and panels are part of their regular programming for all shows), Trevor invites the group to reach out and participate in a talk-back, “We’d be happy to host you at our talkback panel. We’d love to have your voice hear as well because that’s really important. We’d welcome you contacting us.” 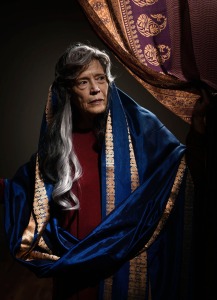 Holly Turner in The Testament of Mary. Photo supplied.

Whether audiences are religious or not, Holly believes anyone can relate to the themes in the show of how truth is created, “In the play, there is a discrepancy between the story the apostles want the world to have and the story that Mary experiences. More broadly, there’s a connection between the actual events and then the stories people want to tell about them; the way the stories people tell about events becomes what happened. We’ve all experienced that in our lives, where we have an event that happens in a family ten years ago, and people tell and retell it and before you know it, it’s really taken on a life of its own.”

This one-woman show takes the form of a monologue from Mary, explaining what she witnessed and how it is different from what the apostles have written. Holly says as a performer, she views the monologue as a confession. “There’s a throughline of what she does and chooses to do around the time of the crucifixion and after. She feels the need to confess it. To unburden. Although we see it once, it seems to me not impossible that she’s done this before and she will do it again. It’s not really written like that, but it seems to me that in her mind, this is the kind of experience that she would relive over and over again. She’s reworking it.”

The Testament of Mary plays at the PCL Studio Theatre in the ATB Financial Arts Barns October 26 – November 4. Tickets are $20 – $30 through Northern Light Theatre’s box office, or to see all three shows in NLT’s season, you can purchase a season subscription for $40 – $75.

October 26 is the preview night where tickets are pay-what-you-can or free for students with valid ID. Special events are as follows: