Hark! The 2017/2018 Edmonton theatre season is upon us. And there’s nothing like opening up the theatre season with an ode to theatre or, more broadly, loving what you do. This is what Lee Hall’s stage adaptation of Shakespeare in Love, playing at the Citadel Theatre until October 8, does best. What a fitting way for the Citadel Theatre’s new Artistic Director, Daryl Cloran, to debut his first season and the first show he’s directing at the Citadel, and welcome audiences back into the traditional venues they may not have visited during the festival season.

The play absorbed me from its opening lines. Shakespeare, struggling to write what eventually becomes Sonnet 18: “Shall I compare… thee… to a… sum… sum… something!”

For anyone who writes, or does any creative work, the lines are a moment of shared understanding and catharsis for the audience.

Shakespeare in Love, based off the Acadamy Award-winning movie of the same title by Marc Norman and Tom Stoppard, is a sensual, tongue-in-cheek imagining of the making of Romeo and Juliet. In the play’s opening scenes, we meet William Shakespeare (Andrew Chown) staring down the long tunnel of writer’s block. After sneaking into a ball, he is enchanted by Viola de Lesseps (Bahareh Yaraghi), unaware that she is actually the “Thomas Kent” he auditioned for a play earlier that day. Viola, the daughter of a wealthy merchant, is a theatre aficionado with the guts to cross-dress and audition for Shakespeare’s next play (women were forbidden from performing on stage). The two fall in love and the rest is written in, well, Romeo and Juliet, which not-so-coincidently follows the arc of William and Viola’s relationship, doomed by Viola’s impending marriage to an aristocrat. Thier love story is tender and based on a mutual respect for each other and their craft, playwrighting and acting respectively. 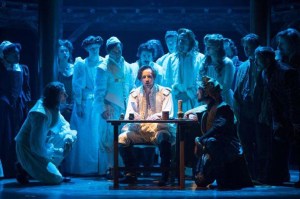 There is much to love in Shakespeare in Love, but as a creative person, the themes about creating art spoke loudest to me.

The play toys with the age-old question, does life imitate art or does art imitate life? It shows that for some people and moments in time, the line is not that clear and sometimes there is no line. The interweaving of William Shakespeare’s story of falling for Viola and those experiences forming key plot points in Romeo and Juliet to the point where, at moments, the play and the reality are indistinguishable. While the story is fictional – Viola is a completely imagined character – the truth of it is clear: for those who build and create, there often is no line between their work and their life.

Although this blurring of art and life is accomplished through the script and rapport between actors, it’s also accomplished in Director Daryl Cloran’s staging. At key moments, several actors are placed around the edges of the stage, observing intimate moments between Viola and William and creating the feeling that speaks true to Shakespeare’s words: all the world’s a stage, and all the men and women merely players. Stories like the ones Shakespeare is famous for are all around us, but it takes artists to shine a light on, and reflect, what is unfolding.

Shakespeare in Love is an ode to the magic of theatre and putting the blood, sweat, and tears to create a masterpiece. The play celebrates the painstaking lows of not quite being able to grasp something and the highs of when things flow effortlessly. And the mystery that is the ephemeral nature of the moment when everything comes together into a moment that’s precisely crafted into being true to nature.

As a celebration of theatre and the artists who create it, Shakespeare in Love is a fitting opener for the first season at the Citadel programmed by Daryl Cloran.