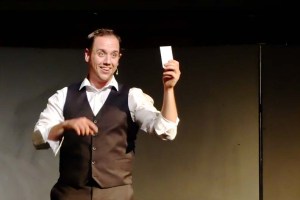 A show that promises to “mess with your mind” has a lot to live up to.

Good thing performer, magician and mentalist Jeff Newman has been practising since he first became fascinated with the art of mentalism at age six. “I watched a magic special and Max Maven came on and said ‘I’m going to read your mind,’ and he did and it blew my six-year-old mind. It wasn’t long until I had my own magic set and magic took off as a hobby. I rediscovered it in my early 20s after my athletic career ended, and I started focusing on the mindreading and the mentalism side of magic and eventually developed my own show and character and produced my own stuff.”

Mentalism, Jeff says,  uses “skills from magic, psychology, science, and suggestion to appear to influence thoughts and make predictions and make people believe you can read their mind.”

In Jeff’s Mind Games, the first show in the 2017/2018 Roxy Performance Series, the audience is part of a series of games and puzzles that Jeff says will leave audiences wondering how he’s able to pull off the mind-reading tricks he presents. Jeff and Hannah Rud created this show around different games Jeff played growing up. A couple examples of the types of games audiences can expect are real-life versions of Guess Who? and Clue.

“[In Guess Who?] we have audience members where they think of one of these people and I ask them questions that they answer silently rather than out loud and I interpret which person they’re thinking of out of this line up of people. It’s a great way to start the show – it involves a large part of the audience. It’s fun, it’s light, it’s hopefully funny. Although, I think our favourite bit is where we use audience suggestions to play a game of Clue. We stage a murder with three people from the audience and each person chooses a random person, place or thing and it’s up to me to determine not only which person, thing or place they’re thinking of but to go and identify who or what these things are. It’s probably my favourite effect. It’s so amazing but still funny and a little ridiculous and it involves the entire audience because people throw their suggestions into a box as they’re coming into the show, and that’s what goes on stage where the suspect, the location and the murder weapon are drawn from. I have no idea what it’s going to be until that box is brought on stage.”

While you may have seen his performances of Mind Games at the 2014 or 2016 Edmonton Fringe Festivals, the high level of audience involvement makes every show different. Jeff says, “that’s where a lot of the fun comes from. It’s different every night. You never know who you’re going to have on stage. That’s what’s so exciting for me as a performer. I never know who I’m going to have up there and it winds up being a blast because the entire time you’re playing off of and working with the crowd.” And Jeff assures, no one’s PIN, or other personal information, will be revealed.

Despite the differences each different audience brings to the show, Jeff and Hannah have also developed the show extensively over the past three years, bringing to Edmonton what Jeff calls, “the most polished version of the show. I don’t want to say the final version – we’re always finding new ways to make it interesting and different.”

You may have noticed more and more magic and mentalism shows on the Fringe Festival circuit over the past few years, and Jeff says that interest corresponds with an increase in interest in magic in popular culture. “We’re seeing a huge increase in magic performances in general partially because of the popular culture that’s happening now, you have your Got Talent shows like America’s Got Talent, and a lot of magicians getting specials, where you’re having these reality-TV-type shows with magicians. I think it’s becoming more and more acceptable in popular culture to enjoy magic.”

The draw, Jeff says, to mentalism shows, in particular, is, “when you go to a magic show, you come out with a possible explanation, but when it comes to mind-reading, a lot of people walk away saying, ‘I have no idea how that’s done’. There’s this element of wonder that comes with mind-reading, with mentalism, that really hits in a visceral way. I think that’s why a lot of people come to see my shows because it’s that one last area where it could still be this amazing, wonderful, magical unknown that still exists in the world.”

Mind Games by Jeff Newman and Hannah Rud plays at The Roxy on Gateway September 21 – 24. Tickets are $18 – $22 through Theatre Network’s box office.