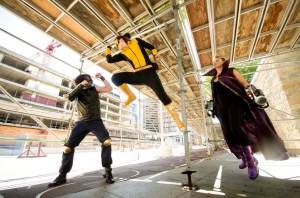 An interview with William Banfield.

Describe your show in one sentence.

Okay, now that we’re intrigued… what’s the longer description of your show?

The Spark is Accidental Humour Co.’s take on the comic book genre. Our story centers around mild mannered Maddy Martin – a brilliant electrical engineer who’s desperate to prove herself when a freak accident grants her the incredible powers of… static electricity. Before long she dons a mask to become “The Spark” and must race against time to stop the return of the evil Dr. Crime before he destroys the city. Maddy must unravel the mystery of her past, shed light on a long forgotten superhero, and survive gender dynamics in the workplace, all while earning her place as the protector of Metro City.

The Spark: A Hero Takes Charge draws inspiration from the world of comic books. Why use this as a jumping off point and how do you play within this world?

As a company, we have always drawn on our comedic styling when creating original stories that parody film genres.  Superhero movies are extremely popular and have now become a genre in and of themselves, and we have been excited to harvest that genre for its great potential of comedy, originality, and spectacle. The Spark: A Hero Takes Charge is our take on an “origin story” with plenty of references to modern tropes and a few classic elements sprinkled in.

Accidental Humour strives to create a seamless blend between live theatre and pre-recorded film. The interactive media elements of our shows have vastly changed from our origins; i.e. a unit set where everything on stage happens inside a house and everything outside the house was displayed on one projection screen, to fully choreographed fight scenes where an onstage actor is fighting both onstage performers and video actors, on multiple screens, at the same time. This level of interaction required diligent preparation and commitment from the entire team involved and can take up to a year to create. With every new production, we try to “one up” ourselves in an effort to continue growing artistically while also giving new and returning audiences a sense of awe that leaves them saying “I have never seen anything like that!”

Our shows are accessible to a wide demographic, including fans of movies, theatre, action, and comedy. So even if you aren’t specifically a “superhero” fan, you will have a great time at our show. It’s going to be ELECTRIFYING!

The 36th Edmonton International Fringe Theatre Festival is August 17 – 27. Get your tickets at tickets.fringetheatre.ca starting August 9.