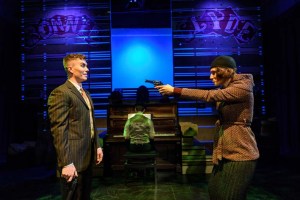 When you think of famous historical duos, Bonnie Parker & Clyde Barrow have got to come to the top of your mind.

The duo’s robbery and murder spree lasted only two years, but the myths and hype created by the media around these two have endured through the ages.

Trevor Schmidt, Northern Light Theatre’s Artistic Director and the Director of this production explains why he thinks the legend of Bonnie & Clyde resonates throughout the ages,  “I think that legendary aspect of their time together was fueled by the fact that they were sort of the first media stars, the first ones who became famous through newsprint and radio. They became iconic figures in a time period where the media made that possible. It was a strange obsession with these two kids – they were really young, 24 and 25 by the time they died… Plus, I think it’s a tragic love story, and I love tragic love stories. I think love is tragic. You know it’s not going to end happily, but you can’t help but watch it while it goes bad and hope it goes well. With this particular story, because it’s well-known, we know it’ s not going to end well. ”

Trevor stresses Bonnie & Clyde: the Two Person, Six-Gun Musical really tries to strip away the media hype that surrounded the two criminals and uses true historical events to explore who they were as people through the lens of their relationship. “It is really about the connection between those two people… [Other representations] are always trying to decide which one of them is the ‘bad guy’. Was Bonnie manipulative and controlling and kind of slutty and did she pull him off the path? Or was he troubled and a dangerous criminal and did he pull this nice girl into a web? I don’t buy either of those. I think that’s not the way the real world works. It’s far more interesting to see these two people who are both desperate and damaged people, even from an early age because of their upbringing, and when they do meet each other they recognise a kindred soul and they need each other in order to survive.”

“I find the story very moving, particularly by the end – I think the audience will look at them and think ‘what a waste of two smart, funny, intelligent people who had no choice. They had no other options. There was no other way to live for the two of them.’ They could’ve been so much more in a different time and place.”

Bonnie & Clyde has been on Trevor’s radar as a show he wanted to produce for about a decade, and he knew when he saw Matthew Lindholm in Amanda Neufeld’s 2012 Fringe production of Reefer Madness, he knew he had found his Clyde Barrow. “I was about to program it for Northern Light and he moved to Toronto. I thought that was the guy I had in my head. I put the show on the backburner again and it sat there… I sent a message to Matthew asking him if he’d be interested in coming back to Edmonton to do the show, and he said, ‘Yes, but could you cast Amanda? Because I’d really like to work with her.'” 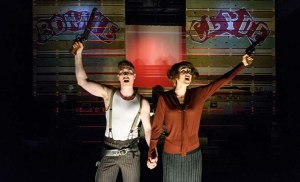 Amanda Neufeld was already on Trevor’s shortlist, having worked with her on last year’s production of Klondykes he knew Amanda could sing the show perfectly, and so the production came together. “The voices on these two are just incredible, as is the technical control of their instruments. They’re both incredibly hard workers.”

Trevor describes the show’s music as being rooted in Bonnie and Clyde’s true time period of the 1930s in Texas. “There are some songs that are quite musical theatre, but most of it has a bluegrass, folk, almost country kind of feel. Salon-hall jazz. They’re doing Texan accents, so some of the sounds lend themselves to a slight country or bluegrass kind of sound because of the accent, it leads you to form words and vocalise things in a way that enhances that kind of feeling. We’re staging it a lot like Klondykes – there are some intimate moments where instead of trying to say these people burst into song in the middle of scene, we actually have them step out of the scene to a microphone and perform it as though it’s a concert and then step back into the scene and go on.”

As usual, Northern Light Theatre is hosting a number of special events in conjunction with this production. See NLT’s website for full details.