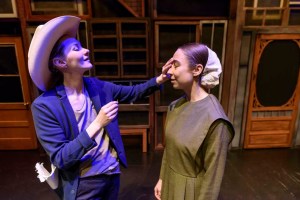 “Do you feel we can rebel against our oppressors, without losing our love and our tolerance and our ability to forgive?”

It’s a question that lies at the centre of Irma Voth, adapted by Chris Craddock from the novel of the same name by Miriam Toews, now running at Theatre Network until May 7.

In the case of the title character, the more specific question is more like, can one leave the strict and insular Mennonite community and abusive father they’ve grown up with, and still greet the world with the same joy and curiosity they had before?

Irma Voth is a coming-of-age story of the title character, as she marries someone her father disapproves of, works as a translator for a film crew whose presence on the Mennonite colony is barely tolerated, and eventually decides to run away from her home with her two younger sisters in tow. In doing so, Irma and her sister Aggie leave the structure of their religion and their father that has framed their life, in the hopes of giving themselves and baby Ximena a life with more self-determination and freedom.

Directed by Bradley Moss, this world première is a fun, fast-paced and sweet production. At about 2 1/2 hours (including intermission), this is one of the longer shows I’ve seen at Theatre Network, but it covers a lot of ground. The story is dense, and the pacing is fast, with quick, efficient scenes that give a snapshot into the story Irma is telling and then move on. This is not a show that allows the actors to pause for a beat, especially given four of the five actors are constantly changing between about two dozen characters that surround Irma on her journey. There’s a sense of fun to the quick character changes – whether it’s right on stage or a quick costume change behind the set, a sense of playfulness is infused through the many hats most of the actors wear in this story. The script is also very tongue in cheek, with the characters frequently explaining to the audience what’s going on — “we’re speaking in low German now, but to you, it’ll sound like English.”

This sense of fun is also infused into the set itself (designed by Megan Koshka), which starts out seeming like an imposing wall of variously placed windows that brings the playing space forward right to the audience, but as the play progresses, the set becomes almost like a dollhouse, with the actors using it in increasingly new and surprising ways. Complementary to the set is Ian Jackson’s media design, which uses the set as a background for a number of projections that help the play travel between the various locales it takes place in.

Irma Voth is a story about escaping an abusive situation and opening oneself up to the world, with a complimentary theme of art and its importance in the world serving to frame the idea of opening oneself up to the world beyond one’s former boundaries. Without having read the book the play is based upon, it’s obvious the cast and crew have stressed putting fun and levity into this show. Without that emphasis on fun, I think the dark situation Irma is running from would have overwhelmed the show, although, I do wish there was a bit more of a struggle in the show. Empathising with the characters, it’s fair to say it would be incredibly hard to step into a world that you have been isolated from in every way – physically, culturally, and educationally. Yet, I didn’t feel that come through from the characters, who mostly treated their transition from the colony to Mexico City with a sense of adventure and frivolity. I think it would have been possible to maintain the overall lightness of the play while adding more depth to the characters by showing moments of uncertainty or doubt that they must have been feeling, being in such an unfamiliar situation. One of the most beautiful scenes in Irma Voth is where Aggie is in a museum completely overcome by seeing a Diego Rivera mural, saying she didn’t know it was possible for humans to be capable of reflecting the world back in such a way. That moment was a beautiful intersection of the oppression of her father (who says art is a lie) being combined with insight into her newfound freedom that really put the situation the characters are experiencing into perspective. I think adding more moments like this, interspersed with the sweet, joyful moments that are already at the heart of this production, would have added even more depth to the production.

As the title character, Andréa Jorawsky is the picture of a kind-hearted, genuine and curious teenager in the midst of transforming into an adult. She is matter-of-fact and completely open to the world and what it brings, walking the line between naivety and active exploration.

As Irma’s younger sister Aggie (as well as a number of other characters), Kendra Connor is the emotional firecracker, actively pushing the constraints and rules she sees in front of her. She’s a delight to watch through Irma’s eyes – an eager and passionate preteen who doesn’t know much of the world, other than she wants to soak as much of it in as possible.

I really enjoyed the contrast in Chris Craddock’s characters of Mr Voth and Wilson in the first act – the first a strict, abusive head of household who demands total control over his family, the other a gentle soul who introduces Irma to the beauty of art.

As Diego, the director of a film being shot at the colony, you can tell that Kristi Hansen’s portrayal of Diego’s philosophies on art come from a genuine place and helps frame the theme in the play of the importance of art.

Todd Houseman’s youth lends an exuberance to the play in his portrayal of the characters of Jorge (Irma’s husband), members of the film crew, and a young student Irma meets in Mexico – these characters are all around Irma’s age, and yet unburdened by the with the rigour Irma has growth up with.

By the honesty and joy that’s infused from the start to the finish in Irma Voth, I think the answer to Diego’s question of Irma, “Do you feel we can rebel against our oppressors, without losing our love and our tolerance and our ability to forgive?”, is a resounding yes, if those traits are at the core of who you are. Irma Voth is a testament to the resilience of one’s core values, despite difficult circumstances.

The world première of Irma Voth, based on Miriam Toews’ novel of the same name and adapted by Chris Craddock, is April 18 – May 7 at the Roxy on Gateway.  Tickets are $24 – $30 through Theatre Network’s Box Office. Tickets are two-for-one on April 25 and May 2.