It’s always interesting thinking about what it’s like to be isolated in isolation. You have a lot of time to think. Irma is really fascinating character in that she’s just open. She’s open to the world and that could be her downfall in a way too… She’s quite achingly human. I think it’s really going to resonate. – Kristi Hansen on Irma Voth

The setting is a Mennonite colony in the Mexican state of Chihuahua. The central, and title, character is Irma Voth – a 19-year-old woman who is a bit of a black sheep in the colony. 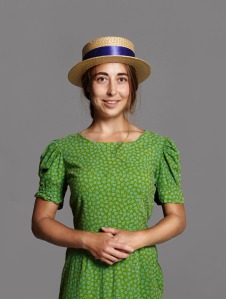 Kristi Hansen, who plays more than five characters in Irma Voth and has been involved since the early stages of the script development, describes the play as being about Irma as her boundaries expand beyond the Mennonite colony she grew up on. First, is her marriage to a non-Mennonite man, which further strains her already tense relationship with her father. After her husband leaves her, a film crew comes to her colony and hires her as a translator for the film crew. Kristi’s primary character, Diego, is the film’s director. Kristi says, “The first act is really about the crew making this movie and Irma meeting so many different people from the world and learning about herself. There’s a bit of an inciting incident at the end of the first act, things get a little heated and she ends up having to leave the colony, and so the second act is about her running away to Mexico City with her younger sister Aggie and her baby sister, trying to start a new life outside of the Mennonite world. Similar to Summer of My Amazing Luck, it turns into a wild road trip exploring those themes of what it’s like to be a black sheep in the Mennonite community and discover yourself and march to the sound of your own drum.”

Kristi notes that in the source material the play is based on, Miriam Toews drew from her experience working on the film Silent Light with director Carlos Reygadas, who Kristi’s character Diego is based on. Kristi notes, “I’ve been lucky enough to play a number of male characters in recent years, like in Passion Play where I played all the characters who were in power at the time – Ronald Regan and Hitler and others. In my career as an actor, I’m going in to audition with typically male roles and monologues. I’m interested in playing great characters who just happen to be men.”

Kristi says one of the play’s larger themes is about art and the purpose of art and artists in life. “Art is a huge theme, certainly for my character, Diego. His entry point is the art and he cares for people, but art is also a monster – it’s a beast. It can steal your humanity in a way because art really takes a mirror to humanity – it’s layers upon layers. The characters also discover art. There’s a beautiful scene when Aggie, the younger sister, goes into a museum in Mexico and it’s the first time she’s seen art. She’s so overwhelmed because she didn’t know a human being could create something like that, that it’s part of our capacity to make art. To create art and for people to witness it. That’s really beautiful to me, that a human being can create this kind of beauty and depth and see into ourselves so deeply and reflect it back to us.”

The world première of Irma Voth, based on Miriam Toews’ novel of the same name and adapted by Chris Craddock, is April 18 – May 7 at the Roxy on Gateway.  Tickets are $24 – $30 through Theatre Network’s Box Office. Tickets for preview performances on April 18 and 19 are $17. Tickets are two-for-one on April 25 and May 2.