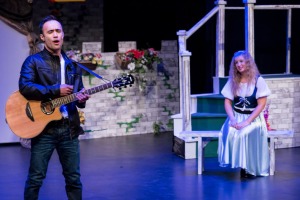 One of the beautiful things about community theatre is that it shifts and adapts to the needs of the community as they arise. One example of that type of shift can be seen in Leduc Drama Society‘s upcoming production of the musical Sleeping Beauty by David Kisor and Joseph McDonough.

Sleeping Beauty will run at the MacLab Centre for the Performing Arts in Leduc February 3 – 11.

On choosing Sleeping Beauty for the community theatre’s 16/17 season, Artistic Director Lyndon Anderson says, “We have a lot of families here in Leduc, so we thought maybe we need to switch from being strictly an adult-based theatre company and try to appeal to those young families in our community.”

To do this, Leduc Drama Society needed to partner with local dance studio, Connectivity Dance, on not only the choreography but also in bringing in two troupes of youth dancers (a total of 23!) for the show. Lyndon says, “I went through the script and selected certain places where we could incorporate the dancers and we worked out the music with the band. Jana Hamilton [of Connectivity Dance] took that back to the studio and they’ve primarily rehearsed their portion independently. Our ensemble came together beautifully early in rehearsals, but I still kind of felt like something was missing and I couldn’t put my finger on it. That first day that we brought the Connectivity Dance group into rehearsal in December, I teared up because I realized that was what was missing. I think when you’re producing a fairytale, it doesn’t have the magic until there are children there.”

Lyndon says the musical follows the plot of the classic fairy tale, with a few notable distinctions about the characters’ nature. The story still has the infant princess cursed at birth to die (thereafter modified to fall asleep for 100 years) after pricking her finger at age 16, but in this rendition of Sleeping Beauty, the characters develop differently than in the original work it draws inspiration from. Lyndon says, “The male characters are not just cardboard cutout heroes who come in and save the day. They actually express vulnerability and fear, which really in your traditional fairy tales, you don’t see that in the men. The same thing in the women, they are outspoken without being shrews. They are curious and resourceful and that was really appealing to me.”

Bringing Sleeping Beauty to life will be a team of 66 people from Leduc and area. This includes 24 adult members of the Leduc Drama Society, three children of the society’s members, 23 dancers from Connectivity Dance, 12 crew members, and 12 band members. Lyndon adds, “We have one other very special cast member who will be making an appearance, but I can’t give too much away. She’s being crafted by the Odd-Lot Puppetry Co., which is very exciting. It’s going to be quite a spectacle.”

In addition to being an entertaining evening, Sleeping Beauty will help raise awareness of the Leduc Drama Society, as they move into the construction phase of their playhouse, which they discovered needed major repairs in 2015. With grants to fund the construction having come through, Lyndon says the nonprofit is set up well for the repairs, now they want to focus on building audiences. “We’re trying really hard to not just be a community theatre organization – we’re trying to be an amateur theatre group. We’re working hard to challenge ourselves and not just offer that slate of community theatre style programming that you see in the outlying communities, we want to be a big player in the Edmonton theatre scene.”