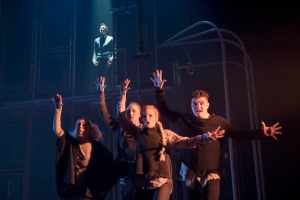 What happens to your town, and the resident’s sense of self, when the primary economic driver dries up?

It’s a question Albertans are all too familiar with, especially lately.

It’s also what lays at the centre of Catalyst Theatre’s latest work, Fortune Falls, playing at the Citadel Theatre until February 5.

We are transported to the town of Fortune Falls, which has been sustained by the Mercey Chocolate Factory for generations. The town residents love the factory, their employment at it, and the product they produce, to the point where they call themselves “the children of Mercey”. Everett Liddelman, whom the musical centres around, is one of those children – a grandchild, really, given that his parents both worked at the factory. He’s dreamed about working at the factory all his life and counts the factory’s founder as one of his heroes.

And then the factory shuts down. Slowly, at first. Then the jobs start haemorrhaging.

What follows is a close examination of the minutia of Everett’s experience working at the factory as Head of Security. As he patrols the factory, he meets several employees – even the founder he’s admired all his life – and a few animals along the way.

Fortune Falls takes place in a dream world, where Everett encounters larger-than-life characters and it becomes increasingly obvious that this is a journey Everett has to go on to resolve his disappointment at the factory being closed and his grief for his dream being lost. Whether it’s real or all in his mind is up for debate.

Being honest, Catalyst Theatre could do just about anything and I’d probably be happy. The company’s distinct aesthetic, unique storytelling ability, and consistently catchy music always hold the promise of a quality production. Seeing Catalyst’s work just feels good deep down – it’s meticulously crafted, familiar, and is a company I’m so proud to call Edmonton-born. And while I didn’t love Fortune Falls,  it’s that local pride and the intentionality that comes with Catalyst’s work that still makes me happy to have seen it.

Fortune Falls is a unique musical, most notably for the fact that the songs are selectively interspersed throughout the play, with most of the action being conveyed by dialogue and narration, instead of song as in a traditional musical. While Catalyst’s work has always been dark, this was the first of their shows that I’ve seen that’s downright creepy. The echoes, bangs, creaks and other sounds of an abandoned factory that Matthew Skopyk layers into the show’s sound design left shivers down my spine.

I also left thinking Fortune Falls is one of the first musicals I’ve seen appearing to be written for millennials; a generation told if you believe enough, your dreams will come true. Fortune Falls shows the harsh reality of that being untrue. It’s a hard story to watch come to life in today’s economy. It hits close to home and reinforces the work we have ahead of us to diversify our economy. The fact that Everett’s dream job – even when his mother asks him for his wildest dream – is to work at the factory reminded me a lot of my hometown and the folks I know who dropped out of high school to work in the oilfield. 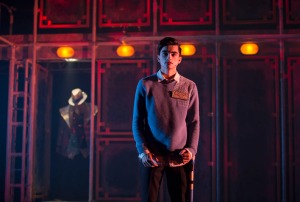 But, I found the play also faltered in making Everett’s dream job to work at the Mercey Chocolate Factory. I absolutely understand what it’s like to have a dream job, but I wasn’t invested in Everett’s dream. I didn’t have that emotional connection to the character and his dream that I needed to sustain me through the rest of the play. At the beginning of the play, we’re told that everyone in the town loves the factory and aspires to work there. And one of the play’s potent lessons is about the dangers of letting others choose your dream for you. But the earnestness of Everett’s excitement and dedication to working at the factory is not that of someone who has had another’s dream forced upon them. That dream to work at the factory is of Everett’s own making, I just didn’t understand the root of it. Was it to try to bring his departed father back for his mother in some small way? Was it to fit in with his friends? Something making the dream personal to Everett didn’t click for me, making the minutia of the description of achieving that dream overwhelming.

As usual, the team Catalyst assembled did a crack job of bringing this story to life. The five-person cast goes above and beyond as they weave the story together, with each member of the four-person ensemble (Shannon Blanchet, Braydon Bowler-Coltman, Graham Mothersill, and Jamie Tognazzini) melting in and out of different characters. In the central role of Everett, Daniel Fong is earnest, expressive, and the complete picture of an optimist that his character necessitates.

While the ensemble’s roles are many, I most appreciated the subtle but honest representations of mental health challenges that underpin Fortune Falls. In particular, I loved Jamie Tognazzini’s representation of Everett’s mother who struggles with anxiety – a nice blend of the pressure to engage “normally” with society but just not being able to. As both Everett’s father and, at another point in the play, Mr. Mercey,  Braydon Dowler-Coltman’s representation of their desperation to capture something ineffable was palpable. Shannon Blanchet stood out with her ominous, imposing, and bruskly humourous personification of the factory’s Human Resources department. Graham Mothersill did a lot of the heavy lifting in narrating the story but also had a delightful moment as a repairman whose anxiety was barely hidden underneath his expressions of pride in his job. Kerem Çetinel’s flexible, functional industrial set – the abandoned Mercey Chocolate Factory – serves as the perfect backdrop to this story of the beauty and danger of dreams.