Have you ever pinned your hopes and expectations for something onto a particular individual, only to later find out that person was not who you thought they were?

If you have, you’d know the experience is a powerful (and sometimes painful) lesson in expectation setting and examining your own motivations and reasons for doing or not doing the thing that has put you in that situation.

However, as is the case in Theresa Rebeck’s Seminar, meeting your hero and discovering they’re not quite who you thought they were can also form the basis of a hilariously entertaining 100-minute play.

Giorgia Severini, the show’s Director and co-founder of Ginger & Rosemary Theatre, which is bringing Seminar to Edmonton, describes the show as being about, “four young writers who are taking a $5,000 writing seminar with Leonard, who was originated by Alan Rickman in the Broadway production, who is a supposed literary genius. They’re all coming to the seminar with the intent that it will finally make them famous. There are four characters – Kate, who has been working on the same story for six years and she thinks that Leonard is going to give her the magic formula to finally finish the story. Douglas has been published in several pretentious literary magazines and is pushing for more recognition. Izzy simply states she is going to be famous, that the seminar is going to do that for her. Finally, there is Martin who is one of those bitter writer types – a starving artist – who is taking the seminar but is very reluctant to show his work and take that step.” 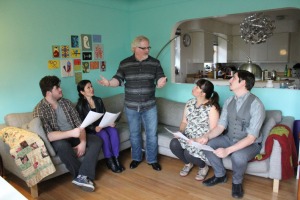 Giorgia explains Leonard is quite a famous author with a celebrity aura around him. “Leonard is a writing professor who talks about himself a lot. He’s done a lot of cocaine, he’s gone on a lot of trips to developing countries. In teaching this seminar, he tells the truth – he doesn’t come across as nice at all. He gives harsh criticism that a lot of the students don’t want to hear. He is really trying to help them, his criticism does have meaning behind it.”

That’s one of the strong themes of Seminar – critique and the ability to learn from criticism, without letting one’s ego get in the way. Giorgia reflects, “As writers and artists in general, you have to hear the truth, it’s the only way you’re going to improve.”

Of course, the dismantling of the aura around our heroes is another theme this production hones in on, Giorgia explains, “Most people will have had an experience with a teacher of some kind who was very harsh with them – may have helped or may have not. Or someone they looked up to may have turned out to not be who they thought.”

Finding out your hero isn’t who you thought they were doesn’t always have to be a sobering experience, though. Giorgia says the combination of the harsh feedback Leonard provides, as well as the romantic entanglements of the characters make for a humorous evening. “It’s very funny – intellectual type humour – and the pacing of it is really entertaining.”

Seminar by Theresa Rebeck plays at the PCL Studio Theatre at the ATB Arts Barns December 14 – 18. Tickets are $18 through the Fringe Theatre Adventures box office.