“We are all in the gutter, but some of us are looking at the stars.”

“I can resist anything except temptation.”

“In this world there are only two tragedies. One is not getting what one wants, and the other is getting it.”

“What is a cynic? A man who knows the price of everything and the value of nothing.”

Sound familiar? Those are just some of the many famous quotes from Oscar Wilde’s Lady Windermere’s Fan. Rarely produced, this play is next up at Walterdale Theatre December 7 – 17.

A comedy of manners, wit, and mistaken identity 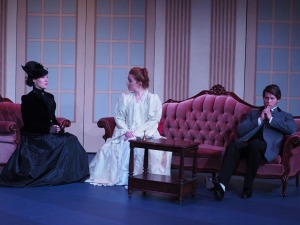 In Lady Windermere’s Fan, we meet Lady Windermere (played by Miranda Broumas), who is convinced her husband is having an affair with Mrs Erlynne (Marsha Amanova). In retribution, Lady Windermere decides to leave her husband for another man. But it turns out not everyone is who they seem to be, and this deception manifests in a comedy of mistaken identities that will leave audiences thinking about societal expectations and public versus private personas.

Director Martin Stout describes Lady Windermere’s Fan as, “A Victorian melodrama, a farce really. It depends on misunderstandings and things being overheard and secrets being kept or found out. Oscar Wilde is very clever in that so much of his humour and witticism is derived from irony and from things being completely opposite of how they appear. Although you’ve got many of the standard tropes of the comedy with the secret identity, and the scandalous past and the lover’s triangle, none of those things in the play are actually what they first appear to be.”

A lighthearted comedy, with serious undertones 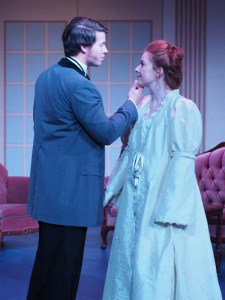 While the secrets, mistaken identities and lovers quarrels lend themselves well to the comedy Lady Windermere’s Fan is known for, Martin says the play subtly delivers searing social commentary wrapped in comedy.

“It’s a sharp social commentary – it’s full of wit and humour, but Oscar Wilde also exposes a lot of the hypocrisy in society. A lot of the play is about the difference between the face we put on in public to conform to the expectations of society and other people versus what our private desires and things that we do that we don’t want the public to know about. In that, there’s a certain amount of hypocrisy. As well, the play is also about different standards of behaviour that men and women are held to. What’s acceptable for a man to do and say is different from what’s acceptable for a woman to do or say. Although it’s set in 1892 in a very rigid society with rules about what’s acceptable and what isn’t, I think a lot of it still applies today… With social media, we curate a particular appearance and demeanour and we pass out ‘likes’ about what’s socially acceptable and what people want to see about us. It becomes quite a rigid system of what’s acceptable and what isn’t. For most people, that’s different than who they actually are.”