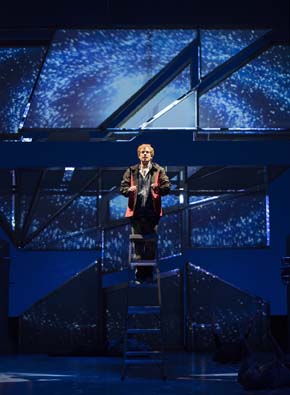 Edmund Stapleton in The Curious Incident of the Dog in the Night-Time at the Citadel Theatre. Photo credit: David Cooper

The magic of theatre for me has always been its ability to totally absorb me into another reality – whether that’s another world, another town, or the experience of another person. The latter is definitely the case with the Canadian première of Simon Stephens’ adaptation of Mark Haddon’s The Curious Case of the Dog in the Night-Time, playing at the Citadel Theatre until October 9.

In The Curious Case of the Dog in the Night-Time, we step into the world of Christopher Boone – a 15-year-old aspiring astronaut who is passionate about math and has (as he says) “some behavioural difficulties”. We meet Christopher as he is mourning the death of his neighbour’s dog, who has been murdered. Inspired by Sherlock Holmes, Christopher decides to investigate the dog’s murder and along the way, discovers truths about his family that lead him to take actions far outside of his comfort zone.

No matter what pre-conceived notions you enter the theatre with, it’s hard to see Christopher’s “behavioural difficulties” as anything other than similar to what someone on the autism spectrum might exhibit. And if you read anything about either the play or the book upon which the play is based, the dominant theme that stands out is that the story is told through the eyes of someone who is on the autism spectrum, despite the intentions of author Mark Haddon, who has written that The Curious Incident of the Dog in the Night-Time is about difference, being an outsider and perceiving the world in a new way.

Regardless of why Christopher experiences the world the way he does, the production at the Citadel Theatre (a co-production with The Royal Manitoba Theatre Centre), fully immerses the audience in what it is like to be Christopher Boone in a way only the magic of live theatre can.

I love how this total immersion in Christopher’s world both reflect’s the book’s first-person perspective and an idea that Christopher seems to hold at his very core: the idea of truth being of the utmost importance. The Curious Incident of the Dog in the Night-Time places an emphasis on showing and telling the truth of Christopher’s experience of the world.

Under Heidi Malazdrewich’s direction, every element of the Citadel’s production of The Curious Incident of the Dog in the Night-Time is presented as it is perceived by Christopher.

Edmund Stapleton in The Curious Incident of the Dog in the Night-Time at the Citadel Theatre. Photo credit: David Cooper

First, and most obvious, is the way set, costume & lighting designer T. Erin Gruber worked with projection designer Joel Adria and sound designer Elijah Lindenberger (together, the three form ShowStages Collective) have integrated the production elements to help the audience see and hear the world as Christopher. The hanging set pieces and projection capabilities seem underutilised in the first act but kicked into high gear in the second act, following a monologue by Christopher about how he sees everything while most people glance at the world without fully taking it in. Through the projections and the sound design, we experience how overwhelming city lights, billboards, traffic, and crowds would be if you were processing every sensory input you were bombarded with. Working in marketing myself, I’m well aware of the data on how many messages people are exposed to on a daily basis, but I never really imagined the actual experience of what that looks like until I saw the design the ShowStages Collective did for The Curious Incident of the Dog in the Night-Time.

We also experience the world through Christopher’s eyes in through ways the actors have interpreted and perform their characters as Christopher sees them. My favourite was Terri Cherniack’s Mrs. Alexander (Christopher’s neighbour) who seems like she’s over-acting her character until you realize that she is actually just acting as Christopher perceives her – totally bizarre and exaggerated.

Edmund Stapleton’s total commitment to an honest portrayal of Christopher was obvious. I really enjoyed the consistency with which Edmund portrayed Christopher’s physical mannerisms, such as his subtle, but constant movement. I also loved the deadpan delivery of a lot of Christopher’s lines that could have been ‘hammed up’ but weren’t because they are Christopher’s trust and he can’t lie – such as when he’s explaining that he did intend to hit the policeman and it wasn’t an accident, despite what his father says.

Both the impassive way Edmund delivered Christopher’s lines and the way the rest of the cast interacts in a somewhat distant and muted manner further contributes to the absorption into Christopher’s world.

There are very real adult conflicts in The Curious Incident of the Dog in the Night-Time, but the commitment to delivering the story through Christopher’s eyes means that the audience experience of these conflicts is much less dramatic than it would be if we weren’t seeing the play as Christopher. If the adults in the audience were watching the play objectively, they might place more importance on the experience of being in an adulterous relationship or of trying to understand and be understood by a child they can’t connect to. But because Christopher really doesn’t care about those experiences, the audience doesn’t. Instead of bringing our own perceptions and biases to the play, the audience experiences the play through the eyes of someone who is not only a teenager but also one that doesn’t pay much attention to interpersonal interactions.

The way that the play doesn’t dramatise the adult interactions and conflicts was reflected in the way Patricia Zentilli and David Keeley portrayed their characters (Christopher’s mother and father respectively) as imperfect adults, but without any judgement or biases for their decisions or actions.

Regardless of how you choose to interpret how Christopher acts, I really appreciated the attention to detail shown in how the Citadel’s cast and crew have brought this experienced of being immersed in Christopher’s mind to life.