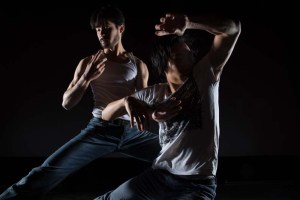 When most people see a bad remake of Godzilla, they roll their eyes and turn it off.

But not Amber Borotsik. When she saw a bad remake of Godzilla, she just saw beyond the cheesiness of the bad props and effects and focused on the actors’ physicality. “I saw the bodies running and the monster tearing down the city and the hero hiding while his heart beats double time and I thought, ‘Oh my god, it’s so physical.’ I was really struck by that.”

And so, The Moon at Midnight was born. Amber describes The Moon at Midnight as an exploration of human physical truth that happens as two people watch an epic, but cheesy, monster movie. And while I know Amber’s work primarily as a theatre artist, the method through which she tells this story is primarily dance – it’s presented by the Brian Webb Dance Company for this year’s Prairie Dance Circuit September 23 & 24.

Amber’s other inspiration for The Moon at Midnight was the experience of lying on the couch as one’s body heals – an equally epic, though not equally as glamorous, experience as a giant monster destroying a city. “I’ve been around and had my own experiences with fragility, whether it comes through injury or through ageing or through an accident. For me, in my time being super injured I’ve spent a lot of time on the couch watching these bad movies, and that started to really interest me how in these moments of life when your bones are busy knitting themselves back together, it’s simultaneously super mundane because you might not be doing much, but also extremely epic. Our show is totally inspired by Godzilla but it’s also inspired by human truth.”

Since The Moon at Midnight is focused on human physical truth, the company Amber has brought together to perform the show is intergenerational and inter-ability and integrates a strong element of improvisation into the piece. Amber says, “We’re an ensemble of folks who just have different experiences of moving. I delight in just watching the company just move as they do. We work with pretty strong forms that shape the improvisation, but it’s different from night to night. What physical truth is in our context is just the body as it is in all its total awesomeness and in its fragility… When we’re improvising, one of our key philosophies is ‘get yourself into trouble’. We have some forms that require someone to launch themselves into space with perhaps not a total idea of what they’re going to do when they get there and just trusting that something will come.” 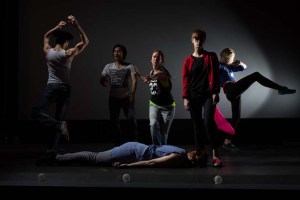 The cast of The Moon at Midnight. Photo Credit PK Photography.

This contrast of the different types of epicness – the destruction of buildings vs. the body healing itself – was also the inspiration for the title of the piece, which Amber said came early in the development process. “The title is really cheesy, and we’re playing with some 80s movie tropes – the movie we’re working with is maybe not a great movie. And the moon is nothing really – it’s a big hunk of rock. It has no light of its own, all it does is reflect another light. But even though it doesn’t have any light of its own, the moon has enchanted us impossibly – moonlight is such a magical thing. I liked that thought with this connection with fragility. The times I’ve been stuck on the couch healing or with a bad cold or whatever, I’ve felt that I don’t have a right to have a body. People who are super fit, super beautiful – those people have a right to have a body and do amazing things but me, I have no light of my own. But what if you did? What if we acknowledged the epicness of healing? And I like that the title makes you look up and even though you’re watching a totally crappy movie, the moon makes you look up and get out of this stinky, hot, dirty living room can be really transformative.”

The Moon at Midnight by Amber Borotsik is presented by the Brian Webb Dance Company at Prairie Dance Circuit, September 23 & 24 @ 8:00 at the Timms Centre for the Arts. Tickets are $35 for adults and $25 for students and seniors through Tix on the Square.