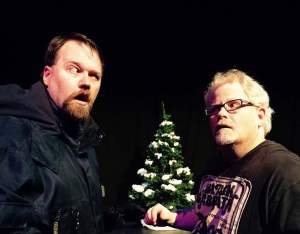 An interview with Giorgia Severini.

Inner Voices features a middle-aged man, Chuck, who crashes his snowmobile after having one too many drinks. Another man joins him in the winter wasteland, but instead of a rescue, the second man turns out to be the manifestation of Chuck’s inner voice. As Chuck struggles to find help while suffering from his injuries and the cold, the Voice pesters him to reflect on his life, face his regrets, and become a better person. The Voice claims his responsibility is to be Chuck’s guide, but he might not be the guide Chuck needs in a snowstorm.

Inner Voices is a new work – what is so wonderful for both audiences and artists in seeing new work at the Edmonton Fringe Festival?

Since the Fringe has no (or at least very few) rules, it’s the best outlet to try out new work. Audiences may see work that wouldn’t be done during the regular season, and it’s a great opportunity for lesser known playwrights to be discovered. Dion Huel’s first play was Apocalypse, Saskatchewan, which I also directed and Bill Roberts acted in, and it had successful runs Edmonton and Regina Fringe Festivals. Its success made us eager to work with Dion further and produce Inner Voices.

Inner Voices is, of course, all about dealing with that little voice we all have in our heads. How do you bring ‘the voice’ to life in the show?

We played the Voice as that annoying friend we all have that gives unsolicited advice and opinions about your life. He may genuinely be trying to help or just insulting you; you don’t really know, but you seem to be stuck with him for life.

Inner Voices sounds pretty funny – can you give some hints as to where the humour in this piece comes from?

There is absurdist humour in having your annoying frenemy pester a man who may be dying of hypothermia through a snowy wilderness. The humour is enhanced by the Voice’s tactic of wearing different outfits at various times to get Chuck to confront different aspects of his life. I don’t want to give too much away, but a hula skirt, a curly wig, and a KISS tie are among the costumes that make appearances.

This show is likely the only appearance of snowsuits at the Fringe!