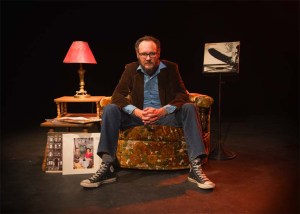 An interview with Stéfan Cédilot.

Zeppelin Was A Cover Band mixes documentary type storytelling and theatrical performance to recount the story of the blues through the music of rock band Led Zeppelin. I tell the story of how the band built a career on a veritable plundering of blues standards while the original recordings play, some dating as far back as the 1920’s.

How has Zeppelin Was a Cover Band grown and evolved over the 10+ years you’ve been performing it?

Zeppelin Was A Cover Band was originally produced in French, as “Zeppelin c’t’un cover band”, in 2006, at MainLine Theatre in Montreal. Then it was remounted in 2007 at the Montreal Fringe festival. That year, a lot of English speaking Fringers admitted that the show sounded amazing… except for the fact that it was in French. So we decided to translate it ourselves (hurray for bilingualism!) and premiered the English version at the 2008 Montreal Fringe, and it turned out to be an even bigger hit than the original version. Since then, we have been active performing both versions, depending on the first language of the majority in any given venue in Quebec. The show has evolved considerably over the years. During the first few years, and despite our exhaustive (or so we thought) research, there would always be some Led Zeppelin or blues fan who would come up to us and ask why we hadn’t talked about this or that song… Turns out some of Zeppelin’s covers had gone under our radar. So we kept adding more and more songs to the story, as we did more research to confirm the veracity of these audience suggestions. We ended up having enough songs to fill over two hours, so we started working with a rotating set list, just like a real rock band, where we would change the song list around, deleting some songs, adding others, so the show would be slightly different every night, though over the years it was becoming obvious that the audience reacted more to some songs/stories than others, so the rotating set list was eventually dropped in favor of those clear favorites.

For this year’s 10th Anniversary version of Zeppelin Was A Cover Band, we decided to shake it up a little more than usual. Producer and director Sophie PostCroteau, who has been a fan of our work for many years, approached us last year because she wanted to direct her own version of the show, but she also wanted to keep me as the performer. So we sent her the script and she made numerous cuts and copy-pasted what was left in a completely different order. And Edmonton is getting the world premiere of this new version. To me, Sophie’s version of Zeppelin Was A Cover Band feels like performing in a completely new show. You can get tired of performing the same thing for many years, and we had flirted with the idea of stopping after a decade of this, but now I feel we could easily do another ten years with this fresh and dynamic new version!

Led Zeppelin were real blues fans, in that they obviously loved all categories of blues, from the gospel blues of the 1920’s, through the delta blues of the 1930’s, to the amplified rhythm & blues of the 1950’s. Consequently, sifting through the numerous covers Zepelin recorded between 1968 and 1976 (only two of their albums, 1973’s Houses Of The Holy and 1979’s In Through The Out Door, are 100% written by the band), there is no stone left unturned. They tried their hand at everything, assimilating every blues subgenre and covering songs by most of the essential blues artists of the 20th century. So Led Zeppelin’s discography is like a Master Class in Blues History: if you have the patience to look for the original versions of all of these songs, you basically end up with a collection of the most important artistic statements 20th century blues has to offer.

It doesn’t sound like Zeppelin Was a Cover Band is a musical, so how is the music integrated into the show?

Zeppelin Was A Cover Band is not a Led Zeppelin cover band, nor is it a musical. I couldn’t sing or play an instrument to save my life, anyway. I’m a storyteller first and foremost, all our shows revolve around rock music, and I am usually accompanied by a DJ, which is the case here. Some people have suggested that it would be cool to have a live band playing the music, but I disagree: the whole point is for the audience to hear how amazing this music is, whether it’s Zeppelin or any of the featured blues artists. And no live band can replicate that, no matter how good they are. We don’t just want you to hear a Robert Johnson song, we want you to hear what a Robert Johnson recording from 1936 really sounds like!