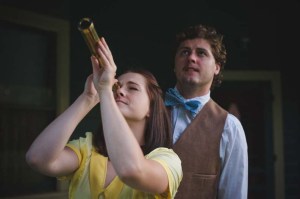 An interview with  Cheryl Jameson.

It’s a splendid moon-filled night in Coley’s Point in 1926. Eighteen-year-old Jacob Mercer has returned from Toronto to the tiny Newfoundland outport, hoping to win back his former sweetheart, Mary Snow. But Mary has become engaged to wealthy Jerome McKenzie, and she is still hurt and bewildered by Jacob’s abrupt departure a year earlier. She will not be easily wooed…

What is your history with Salt-Water Moon and why did you want to bring it to the Edmonton Fringe Festival?

I first saw a production of it when I was doing a summer stock in Trinity, Newfoundland (the namesake of my daughter), about 12 years ago. It was so charming, quippy and whimsical, I thought it would be the perfect fit for Whizgiggling and for the Fringe. I love the historical references that teach us “mainlanders” about Newfoundland hardships and history, and fill the Newfoundlanders with pride.

Salt-Water Moon is a two-hander show, so can you tell me about the two characters and their relationship?

These are fantastic characters!! Mary Snow is a young girl who has been “in service” (working as a maid) since her father died in WWI 10 years ago. She has a younger sister in an orphanage, who is being mistreated. Her biggest motivation is to rescue her sister and when an opportunity arises, a proposal from a wealthy landowner Jerome, she takes it, even though her heart is still broken from Jacob’s sudden departure the year prior.

Jacob Mercer is a proud, young man who also went to work at a young age, 10, when his father was fighting in the war. He deeply respects his father’s contribution to the war efforts and pride is almost a tangable currency to him. He abruptly leaves town when he sees his father being shamed, and only the word of his former girlfriend’s engagement brings him back.

Newfoundland is so rich with culture, humour and spirit. They are famous for story telling and hence have a wide variety of work to choose from. Most of their history is filled with hardship, but they always seem to layer it with humour. With so many Newfoundlanders living in Alberta, Whizgiggling felt it was important to bring cultural and historical awareness to us “mainlanders” about our salt water neighbours, as well as to bring a piece of “home” (and pride) to the land-locked Newfoundlanders.

It only runs for the 1st 7 days!!!! It has an amazingly beautiful set.