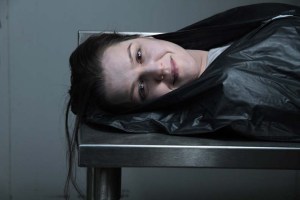 An interview with Nancy Kenny.

Six Feet Under on stage

Claire is a third generation funeral director who is very good at making new friends. It’s not too hard when they don’t talk back. Because they are dead. Just in case that wasn’t clear. The story is told through a series of interactions Claire has with her recently deceased “clients,” who are represented by members of the audience. Just in case anyone might be worried, there is no audience participation.

Can you tell us a bit about Claire, the central character of Everybody Dies In December?

Having grown up in a funeral home where she was trained by her grandfather, Claire is great at her job. Very quickly, however, the audience discovers her loneliness and inability to connect with the living people who matter to her. On the surface, this stems from growing up as the girl with the corpses in the basement, but throughout the show Claire is unearthing truths about herself that are a bit more… grave.

You describe Everybody Dies In December as a dark comedy. Where does the comedy in the show come from?

I interviewed a slew of workers in the funeral industry in my research into writing this show. The one common thread they all seemed to have was that they used their sense of humour to lighten the emotional burden of working with the dead. Death is the ultimate thing you can’t control in life, and it seems laughter is an excellent coping mechanism. In real life, as well as on stage, death is heavy subject matter, so I made sure the character of Claire reflected this with her dry sense of humour.

Where does the title of your show Everybody Dies In December come from?

In 2009, my Mom bought a funeral home. Last December, I was talking to her on the phone and asked how things were going. She told me she had a lot of new customers coming in because everybody dies in December. That line stuck with me ever since.

I’ve been touring this show across the country all summer, and I’m thrilled to be back in Edmonton. After being here with my previous one-woman comedy, Roller Derby Saved My Soul, I know that the Edmonton Fringe audiences really appreciate a good story, and I’m excited to share this new one with them. Incidentally, Roller Derby was the catalyst for producing a documentary film about touring the Canadian Fringe Festival circuit in 2014. My team and I will be holding the Edmonton premiere of the film during Fringe on August 20th at BYOV 26 – Garneau Theatre. More information on that can be found at www.onthefringedoc.com.