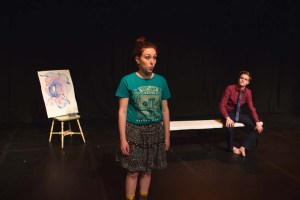 An interview with Indu Iyer, Griffin Schell, and Laurel Schell.

Laurel: This is a funeral for a fish, Vladimir. Vlad was Lily’s most intimate companion. He witnessed ten years of her life from within his glass bowl. Now that he’s dead, the two are able to meet and talk about their lives together, to find a way to move forward from this loss. This is a play about loneliness, and growing up. It’s a play about the things that give us comfort when we are hurting. Most of all, it’s a play about being seen. Who witnesses us in our pain and joy and growth? And what are we left with when they are gone. This play is about meeting and saying goodbye, all at once. Though there is grief, it is also a deeply joyful affair about looking back and moving forward.

Vladimir Is Dead takes place at a funeral for a beloved pet. Can you tell us a bit more about the relationship between the two characters?

ndu: One time I saw a mug in the dog section at Winners, and written on it was who rescued who?and my heart exploded. Canines or not, our relationships with animals can be so intimate and meaningful, and although many people think of fish as just moving plants, there’s still something to ’em. Lily and Vlad have both been very alone in the world. Domesticated Betta fish, though always sparring fish, were specifically bred to fight, which has lead to their inability to live together as adults. Lily was raised in a way that prevented deep connections, so in a similar way, they’ve both been destined to isolation, though it harms Lily more. We cannot be human without others. In this way, Vlad is one of the things that has kept Lily human. He’s just been hanging around in his bowl, but it made a difference. She got him near to death and nursed him back to health, but she needed him just as much as he needed her.

One of the characters in Vladimir is a fish. What are the “rules of engagement” of how the human and the fish interact in Vladimir Is Dead?

Laurel: The play has been written in such a way that the audience accepts the actor they see before them as the fish, without explanation. The two talk as if they have been speaking forever, but it is clear that this is a fleeting experience, one that will come to an end, existing only in this moment.

Vladimir Is Dead is performed by siblings Laurel Schell (as Lily) and Griffin Schell (as Vladimir). What is it like bringing this show to life with your sibling?

Laurel and Griffin: It was great! Not without challenges, but it was very exciting to get to create something together, especially in a medium we both love.

Indu: In 2013 I was doped up on psych meds sleeping fourteen hours a day, and when awake, barely cognizant. That summer, however, I did manage to waddle over to the local pet store and get myself a companion: a betta fish whom I named Vladimir. He lived neither a long, nor good life, but he was the only living thing who I shared my life with in an intimate way. We had meals together. I stared into space. He stared into his glass cage. But having him around made things better. We all have a Vladimir, some little bit of niceness when the world is infinitely unpleasant. A kind cashier, the nice bus driver, the birds outside your window. Vladimir is Dead wants to remind you to honour what helped you when you hurt, and to never forget the value of that. Here’s to all the Vladimirs, and the times we are of such grace to others.