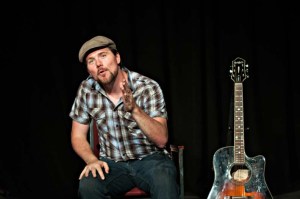 An interview with Paul Strickland and Erika Kate MacDonald.

This is a love story. Or, to be more exact, it’s a one-man tall-tale trailer-park musical comedy all about Big-Fib Trailer-Park’s oldest resident, Rue Morazhit, and her years-ago love affair with Papa Squat, a region-famous song-slinging FALSEbadour with the world’s greatest future-telling kneecap.

Not all the sentences in the show are that long. 😉

Papa Squat is part of the Trailer Park Trilogy. Can you tell us a bit about the trilogy for those who perhaps haven’t seen the other shows (Tales Too Tall for Trailers and Ain’t True & Uncle False)?

Well, my Ain’t True and my Uncle False live in a place called “Big-Fib Trailer-Park cul-de-sac.” Everyone in that trailer-park works at the Pea-Punching Plant, which of course is the factory where you punch peas until they’re black-eyed. All three shows take place in this little community that floats just off the coast of truth.

It’s not important that you’ve seen the other shows to understand this one, but they do complement each other, and certainly if you enjoyed either “Ain’t True & Uncle False” (2014, Acacia Hall) or “Tales Too Tall for Trailers” (2015, Rutherford School) you won’t want to miss “Papa Squat.”

Where do you draw inspiration for the “tall tales” that are part of Papa Squat?

You sit around and tell stories about the past, and, since you can’t relive it, “back-then” gets better and better the further you are from it. You look back and only see the interesting parts because you’re so far away, so you fill in whatever details you have to to keep the story interesting.

What can audiences expect from the music and lyrics of the 6 original songs that are part of Papa Squat?

A reviewer in Orlando called the lyrics “cock-eyed poetry.” I like that. So I’ll say it’s a lot of cock-eyed poetry riding the acoustic blues like a rusty mechanical bull.

Well, here’s what three other people want audiences to know:

“Paul Strickland has brought from Kentucky a minor miracle to the Fringe.”
– ***** John Sadoway, CBC

“Papa Squat is a must-see for all romantics, and others, at this year’s festival.”
– **** Leesa Dahl, Winnpeg Free Press

“I’m living my dreams on not enough sleep
These songs and stories pay just enough to eat
But if you’re buying I’m supplying the toast
I don’t recommend my life to many… but I wouldn’t trade it with most.”
– Papa Squat