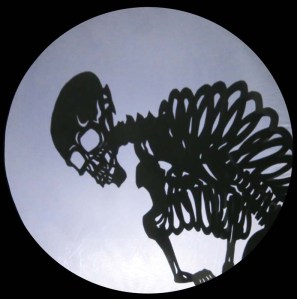 An interview with Daniel Wishes.

We sit in the dark using shadow and light to animate traditional Japanese ghost stories, some true and some based on legend. The shadows on the screen create the look of a live animated movie. We sit in front of the screen so that the audiences can see how we create all of the effects.

Hitodama is based on traditional Japanese ghost stories. What was your process of researching this show like?

Seri Yanai already knew many ghost stories that are a part of Japanese culture. These are stories that most Japanese people know and tell each other on dark nights. Then we put a western spin on them to make them funny as well as scary.

Seri creates very intricate designs for each puppet, then we cut them out together using thick paper. We give them color using gels and transparencies. Then we add rods and joints so that we can operate them. We use flashlights to project them onto a screen.

Where does your show’s title, Hitodama, come from?

A Hitodama is a type of Japanese ghost. It looks like a ball of blue fire and can be seen at night floating over Japanese graveyards. They are said to be the souls of the dead. The balcony of our apartment in Japan actually looks out on a graveyard so we see them all the time.

The show uses over one-hundred intricately-cut shadow puppets and is spoken in both Japanese and English. Also, one of the stories in the show features a ghost who is a bit angry, so there is a small possibility that everyone who watches the show will be cursed forever. It’s probably nothing to worry about, but we thought we should give you a heads-up just in case.