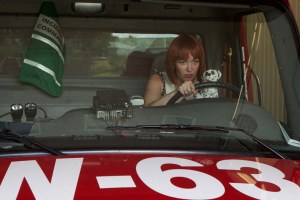 Confessions of a Middle Aged Drama Queen by Erika Conway
August 11 – 14, 16-21 at the Varscona Hotel on Whyte
More information: facebook.com/erikaconway78/

An interview with Erika Conway.

It’s a comedy about a woman who is on a journey of self discovery and coming up to some crossroads that will really define her future. She is one of those women that always tries to be classy and act like a lady but will forever have the toilet paper on the bottom of her shoe.

What questions or ideas inspired you to write Confessions of a Middle Aged Drama Queen?

I was inspired by so many things in this project. Comedy always brings out the best in people, and I have always believed comedy is the way into peoples hearts. The story title and idea was originally formed about 7 years ago as a blog. I have spent a lot of time in the past couple of years hearing myself say ” there are not enough roles for women” and I finally came to a point where I got tired of complaining and knew I needed to step up and start creating myself. I think ultimately my biggest inspiration was having someone I love very much” turn on a light” in me so to speak, and I felt as though I was able to tap into some resources inside of me I never realized I had. I needed to find my voice. And this is where I feel I found it.

The reason to me it was important to have the character be “middle aged” is I think it’s universal that we feel in our lives sometimes that we are running out of time. The idea that we are getting older, the clock is ticking, and we can’t stop it. This is one of the main things that drives her (and me!) and decisions often get made out of fear. The race against time in this show is both funny and universal.

It seems like Confessions of a Middle Aged Drama Queen is about reconciling your character’s dreams with reality in some ways. Can you talk a bit more about the conflict your character is facing in this show?

Thats a great way to describe the conflict! One of her first lines is “Reality and my dreams just DON’T get along.”
She is a dreamer through and through and often reality is a hard pill to swallow. And also the fact that she feels she is up against the clock. Her biggest conflict is fear that who she is…isn’t enough.

We have air conditioning, non-squeaky seats, and alcoholic beverages being served for the show! Wooohooo!