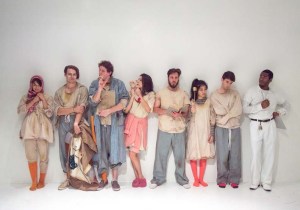 The cast of The Golden Smile. Photo credit: Eliza Rinn

An interview with Yaakov Bressler and Robert Keller.

There’s violence on the ward, and MESSENGER (the caretaker) wants everyone to refrain from using it – or else they’ll lose rec room permission. Caught fighting, our cast of characters – WRITER, DIRECTOR, and three ACTORS – face removal from their beloved rec room, but WRITER is determined to cover it all up as a play. This absurdist musical set on a mental ward in the 1950’s is about the triumph of creativity, sketched in the shadow of mental illness.

The Golden Smile is set in the 1950s – what is it about that era that provides a great backdrop for your show?

The time period in which this show is set is a unique one in terms of the developments that occurred in the world of medicine, specifically, mental health. Notably, the year 1954 is the first year of publication of the DSM (the “Diagnostic and Statistical Manual of Mental Disorders”), which is still used today by psychologists and psychiatrists to make diagnoses. This was a huge milestone for mental health in the 1950’s because it meant that people could now be diagnosed through uniform standards. The resulting culture of psychology is an investigative one – psychologists and psychiatrists began searching for ways to further understand mental illnesses. The play is also inspired by One Flew Over the Cuckoo’s Nest, which takes place in the 1960’s. So you could say that, in terms of eras, our show is one that just precedes Ken Kesey’s iconic work.

The Golden Smile is an absurdist musical comedy featuring a ‘play within a play’. Why did these formats work well for the story you wanted to tell?

We think the play-within-the play is a fascinating mechanism. Like in Hamlet or Kiss Me, Kate, when the characters of a play are putting on a play, we get to see two sides of them–the one that they reveal to the audience they are aware of, and another that only the “real” audience (the people actually sitting off-stage) can see. This dichotomy allows the characters of The Golden Smile to take on a deeper dimensionality, which works particularly well in the context of this story (mental illness).

The Edmonton Fringe Festival will be the Canadian première of The Golden Smile – why did you want to première the show in Edmonton?

The Edmonton Fringe is one of the most established and well-known fringe festivals in North America. While reviewing many festivals across Canada and the U.S., our team realized it would be awesome to bring the show to Edmonton for its Canadian premiere because of the recognition and prestige of Edmonton Fringe. This festival’s audiences have a reputation for being enthusiastic and energetic crowds, so we’re very excited to be presenting our work to them.

This show is a roller-coaster of fun! From quirky songs, to hilarious jokes, to some very serious moments–not to mention the relevance to current mental health issues–The Golden Smile is a particularly thrilling show to see at the Fringe this year. That said, it should be noted that our show contains some profane language and is therefore suitable for adults only.