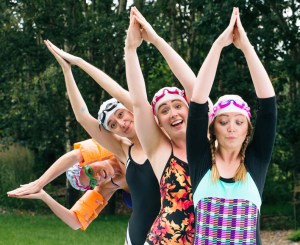 An interview with Rebecca Ann Merkley.

Mary, a former member of the Jr. Girls Aquatic Squad, forms her own team. Her and her new friends have no budget and no pool to practice in, but that doesn’t stop them. They set out to compete in an annual competition. It’s there, Mary is faced with her past team.

The Unsyncables focuses on a synchronised swimming team but takes place at Rutherford School. How is the cast going to recreate the experience of swimming on stage?

The cast mainly has to rely on the audience to use their imagination and “buy into” the fact that there is no actual pool. The choreography makes it clear to the audience when they are underwater or above. There are a few cute props we use as well, but I don’t want to spoil it!

The Unsyncables was part of the NextFest 2016 readings – how did that experience help to develop the show?

The experience at Nextfest helped us trim the script down, discover new things and focus on the heart of the show. It also helped us find which jokes worked the best. After the read, I rewrote for 10 hours, cut out a character and several unnecessary backstories and brought the cast back in to test out the new material. I was very happy for the feedback.

The Unsyncables is set in the 90s. What drew you to that era and how does it manifest in the show?

I set the show in the 90’s (95 to be exact) because that was my own Jr. high years. It manifests in the play through movie and pop culture references, costume, props and music.

It is a show that celebrates friendship and the struggle that comes with overcoming obstacles. It is roughly based on some of my own experiences as a teen and I can’t wait to share it with everyone!