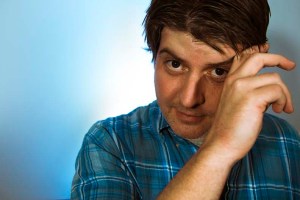 An interview with Stewart Huff.

This show pisses off rednecks.

Donating sperm to my sister’s wife. Yeah, I actually did that. And then I told the story onstage at comedy clubs all around the United States. The reactions I got in some places were astounding. And occasionally violent! So I started asking myself the question, ‘What is that about? Why do humans meet new ideas with violence? And have we always been this way?’

Your show stems from wanting to explore close-mindedness. What made the theatre the right place to explore this topic?

Fringe audiences are great! I did this show at the Orlando Fringe Festival and won an award for “Best Comedy.” I do this show on comedy club stages and the response ranges from enthusiastic to angry-enough-to-attack-me-physically-after-the-show. Or during! One of my favorite stories is about when an audience member threw a flip-flop at my head in the middle of my act. Oddly enough, if you want to make an argument against closed minded behavior and make it funny what you really need is an open minded audience.

Donating Sperm to My Sister’s Wife references “free-thinkers” throughout history. What spurred your desire to include these examples in your show?

I thought, ‘I wonder if I can find examples of people being punished for their beliefs all the way from B.C. to the current moment.’ Most people know about Galileo but I wanted to dig around and find obscure examples that most of us have never heard of. Combing through history to find these people has been a learning experience for me.

Donating Sperm to My Sister’s Wife asks some big questions about human nature, specifically close-mindedness. I’m sure you’ll discuss this in the show, but can you give audiences a hint as to what conclusions you’ve reached through creating this show?

Writing this show has been a fascinating journey. After hours and hours of research, thought and discussion, I’ve come to believe that as soon as our natural curiosity dies then the mind closes. The one thing all closed minded people have in common is they all know they are right. They believe without questioning. The curiosity has died.

I hate to give anything away, but just in case you’re wondering, it was my sister’s WIFE that was pregnant. Not my sister. I’m Kentucky but not THAT Kentucky.