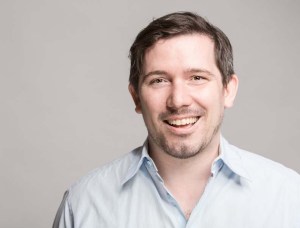 An interview with Adam Bailey.

A presentation on Henri Rousseau quickly goes sideways when the subject matter brings up heartfelt memories and an unlikely comparison to a 70s horror story.

Laugh along as I attempt to make heads or tails of Rousseau, the ultimate outsider, who quit his job at 40 to hang with the youth of Paris and become a famous artist, despite having no talent or training. His unlikely success is one of history’s greatest stories; gob smacking, funny and poignant. It includes everything from the invention of modern plumbing to history’s greatest party, and it’s told by an award-winning entertainer who’s “agreeably user friendly” (Liz Nicholls, Edmonton Journal).

After winning Best of Fringe (Toronto) in 2014 for The Assassination of Robert Ford: Dirty Little Coward and Patron’s Pick (Toronto) in 2016 for Adam Bailey is on Fire, which received ★★★★½ in the Edmonton Sun and ★★★★ from VUE WEEKLY when it played here in 2015, Henri is my third play and I’m proud to be doing its world premiere at the Edmonton Fringe.

In your press release, you say your show Henri is what Edmonton wants. Why do you say that?

Henri is what everybody wants: the ultimate story of self-reinvention, reaffirming that anything is possible. It’s universal.

But it was written because of the time that I had in Edmonton last year, so it was important that I show it here first.

I felt a strong connection to audiences here last year when I did Adam Bailey is On Fire, it was magical. I wanted so badly to come back and share that connection again that I wrote Henri as soon as I returned home from the festival. During the Fringe here everything really does seem possible and that’s what this play celebrates.

What inspired you to create this show about Henri Rousseau? How did you first hear about his unique story?

I first heard the story at a party while I was in University, of course, and my reaction was “how have I never heard this before?” Even in a room of inebriated undergrads, it gets your attention and once you hear it, it’s a story that you never forget. I knew I would stage it as a play one day, and it would obviously be a musical. It has that kind of epicness to it!

When I realized that I had to come back to Edmonton this is the story that came running to the front of my mind demanding to be told. But suddenly it’s a one person show with all of these personal connections, and like my first two plays this whimsical take on a true story leads to surprising revelations. You will be thinking about this play long after you see it.

You say Henri finds parallels between Henri Rousseau in the late 1800s/early 1900s and modern life. Can you talk a bit more about how the show explores these parallels?

Montmartre in Paris at the turn of the last century could easily be a Modern Hipster Enclave. Rousseau’s childhood bullies could easily be anyone else’s. The midlife crisis leading him to give up a decent job to pursue fame in the arts; these parallels are irresistible for a storyteller.

I make myself present in Henri, it is his story but also my own and then we have this bridge that joins us together, a 70s horror classic. And they all end up being the same story somehow. That’s the magic of the show.

Anyone who was impressed with the rapid fire scene changes I used last year, weaving through facts and fantasy, will not be disappointed in how I leap through centuries this year.

It’s directed by Laura Anne Harris who’s Fringe hit Pitch Blond has been touring festivals for over 6 years. She also directed the ★★★★ (CBC) remount tour of TJ Dawe’s Tired Clichés and I’m really thrilled to have her at the helm for Henri.