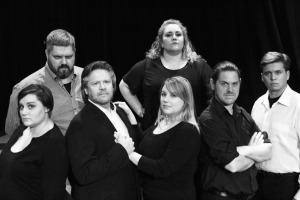 Think your Saturday board games nights are intense? Walterdale Theatre’s Chess – where the stakes are life and death, not just bragging rights – might give you a new perspective.

Chess is a literal and metaphoric game of love, nationalism,deception, and betrayal told through Tim Rice‘s lyrics and music by  Benny Andersson and Björn Ulvaeus (the B’s from ABBA) and brought to life on Walterdale’s stage until July 16.

Set during the 1988 World Chess Championships, an American and a Russian chess player face off against one another, with the antagonisms of Cold War era politics heightening the tension between the opposing players. While solving yet another situation caused by Freddie’s outbursts, his second, Florence spends time with the Russian player Anatoly and the two fall in love. Anatoly defects from Soviet Russia to the United States to be with Florence, however, at the next World Chess Championship match a few months later, both the Soviet and American governments have agendas put into motion by their agents Walter and Molokov that depend on breaking up the couple to help achieve the government’s objectives.

Today in Canada, we’re privileged that it is almost unthinkable for our government to interfere in an individual’s life to the point of taking away the love of their life and perpetrating violence against their family. We clearly see this in Chess – most obviously with the Russian delegation, and more subtly but to the same extent on the American side. The show is a powerful reminder of how international politics can penetrate even a game between two individuals that is supposed to be purely intellectual. As Anatoly, Todd Hauck’s performance shows us most clearly the effects of the state’s manipulations on the individual. Todd’s performance is nuanced behind his stoic exterior – showing the powerful conflicting emotions as he’s choosing to defect from and later to return to Soviet Russia.

As Florence, Lauren Pearson’s performance is a balance of quiet intelligence, matronly care, and ambition to have more in life. I particularly loved the subtle shift in the way she carried herself and interacted with the other characters between when she was second for the American chess player Freddie and when she was with Anatoly, who truly treated her as an equal the way Freddie never did. As the temperamental and petulant Freddie, Matt Boisvert was the character you loved to hate, as he unflinchingly delivered offensive lines one after the other in the same committed way that people holding those beliefs at the time would have.

The drama of Chess really comes alive through the music, and under Sally Hunt’s musical direction, the six-piece band fills Walterdale’s space with the powerful score that heightens the emotion in every song in the musical. If you’ve heard recordings of other productions of Chess, you’ll note that this production has considerably fewer musicians, but because of the way the vocals of the large ensemble are integrated with the musicians, the powerful pop songs sound just as momentous in the Walterdale space. While there were times in Act 1 where it seemed as though some cast members were still vocally warming up as well as getting used to the acoustics of working with the playing space with a sold-out crowd, by Act 2 the cast was doing justice to the catchy pop score. Some the strongest performances were the songs that captured the characters feelings of being torn and having to make difficult decisions like, “Nobody’s Side“, “Anthem“, and “Someone Else’s Story“.

My absolute favourite songs were Walter and Molokov’s “Let’s Work Together” and Melanie Lafleur’s “The Arbiter”. In “Let’s Work Together” (no recordings on YouTube, so you’ll just have to see the show) the contrast between Jesse Setka’s outspoken brassy American with Mark Finlay’s steadfast, reserved Russian was so entertaining. I also loved these two actor’s commitment to their respective accents – Jesse’s was a smooth-talking southern American reminiscent of the best snake oil salesman you’ve ever seen, while Mark’s Russian accent and ability to smoothly deliver his Russian lines was downright impressive and shows the amount of work he put into learning the accent and pronunciation.

Melanie Lafleur as the Arbiter (by the way, I loved that director Kristen Finlay cast this role as a woman when it’s typically cast as a male role) brought so much fire, ferociousness and righteousness to the song “The Arbiter”. When a character really only has the opportunity to demonstrate her personality in one solo song, her commitment to her character’s sense of a world with only right and wrong and no ambiguities was very fun to experience.

Chess plays at Walterdale Theatre (10322 – 83 avenue) until July 16. Run time of the show is about 3 hours, including intermission. Tickets are $14 – $20 (plus applicable fees) in person at Walterdale or through Tix on the Square. There is a talk-back with the cast and team after the performance on Wednesday, July 13.