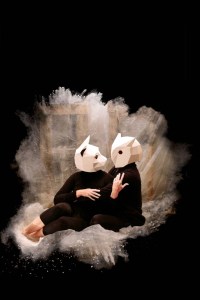 While it’s a cornerstone institution of our theatre scene, only a few of the thousands of people who have passed through the Citadel Theatre’s doors have seen the spaces and machinery found behind-the-scenes where the magic we see on stage starts. But on May 13 and 14, you’ll weave through the maze that is the Citadel’s backstage while following The Runcible Riddle‘s ‘curious cast of characters’ as you try to bring together Edward Lear’s Owl and Pussycat for their wedding by the end of the evening.

The Runcible Riddle is Catch the Keys‘ final production in the 2015/2016 season and is part of the Citadel Theatre‘s Made in Edmonton Cabaret Series. The Runcible Riddle is inspired by the work of Edward Lear, a Victorian-era poet, illustrator, musician and author who is primarily known for his nonsense literature. Above all, you’re probably familiar with his song “The Owl and the Pussycat“, which contains one of Lear’s most famous invented words, ‘runcible spoon’ in the line: “They dined on mince, and slices of quince / which they ate with a runcible spoon”.

For Megan and her sister Beth (who is directing The Runcible Riddle), their personal history with Lear goes back to childhood. “Beth and I grew up on “The Owl and the Pussycat”, which is arguably Lear’s most popular work. It was a story that was read to us every night before bed for as long as I can remember. I really fell in love with it. Two years ago when we were in our workshop for Ursa Major, we were thinking about what we wanted to do next and we started talking about the imaginative works that have inspired us as artists and “The Owl and the Pussycat” was sort of that one thing that really jumped out for both of us.”

Once Megan started researching Edward Lear, she found much more darkness to the author and his work than she originally knew from “The Owl and the Pussycat”. “He was the twentieth of twenty-one children and a significant number of them died – it was the Victorian era and life expectancy was much shorter – but he really had this very tragic childhood. He suffered from seizures and they couldn’t quite diagnose why but he had an older sister who told him it was demons inside of him that were trying to get out. He suffered from depression and I think for him, just based on my research, the creation of this nonsense world and language was an escape for him from all that… Lear is phenomenally nonsensical and nonsensical without purpose, which is the really beautiful thing about it. That’s not to say that Lear’s work doesn’t deal with heavy subjects – it really does. Quite a few of his poems aren’t happy – they’re about loss and longing and feeling out of place.”

However, The Runcible Riddle gives audiences the chance to change the narrative to a happy one, if they can solve the riddle. Megan says, “The top of the show starts with this beautiful celebration of the Owl and the Pussycat’s love. And then something really cataclysmic happens that sends all of these wonderful, beautiful characters spiralling off into an alternate reality. And it’s the audience’s job to go and gather all of these characters and bring them back together so the Owl and the Pussycat may be wed. We’ve used that construct as an allegory for the relationship that Lear had with his longtime friend and rumoured lover, Franklin Lushington. Lushington was a barrister who was very straight-laced, but he and Lear had a rumoured love affair for 40 years, but of course being in the Victorian era, it wasn’t something that they outwardly celebrated. The idea is that Lear has created this beautiful nonsensical world where he and Lushington could go and live together. That’s the framework for what happens but, of course, all of these characters who go off into these alternate realities have come to live very different lives than Lear originally intended, so it’s going to get a little dark. We’re using the phrase ‘fever dream turned acid trip’ – it’s kind of like that. It starts off really weird and it just gets weirder.” 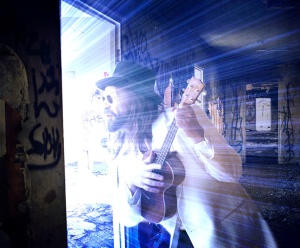 The cast of The Runcible Riddle is full of names and faces of uniquely skilled Edmonton performers, who Megan says have added an extra layer to the show beyond what she and Beth imagined before starting rehearsals. “It’s just as exciting and new for the actors as it is for the audience. We’re asking our actors to do things in a new, different way than they might in a traditional theatre setting and we’re all – including Beth and I – stepping outside of our comfort zones for this one… Steve Pirot brings this wonderfully exploratory acting perspective to things and he’s been practising his ukulele like crazy! Laura Raboud is playing our Pussycat and she’s developed this mind-blowing musical piece that she performs that includes live looping pedals and a piano and glasses – it’s absolutely beautiful and we have an incredibly talented team who are all bringing their respective strengths to the table in a big way.” The show will also feature Kris Joseph, Cody Porter, Morgan Smith, Neil Kuefler, Cliff Kelly, Gianna Vacirca, Ainsley Hillyard, Vincent Forcier, Christine Lesiak, Adam Keefe, Krista Posyniak, Franco Correa, and Sarah Culkin.

One of the things Megan is known for is her spoken word poetry, which served her well in writing this show. Megan says, “We’re playing a lot with convention, so we’ve taken a lot of Lear’s nonsensical words and turned them into a language. We’re playing a lot with the rhythm and the musicality of language and, through that, creating these really bizarre worlds where all of these characters live. It’s really interesting as this project has evolved – we have an incredibly talented cast of 15 people who all bring different strengths to the table and as the project has evolved we’ve sort of found these really fun, musical qualities to the work that I didn’t know were there before we started rehearsing. There are moments where they break out into song and it absolutely makes sense for the world that we’re living in. Steve Pirot who is playing the character of Lear in the show has developed this earworm rhythm that’s really catchy and you walk away from rehearsal singing it afterwards. It’s been really interesting to explore that rhythm in Lear’s work.”

Catch the Keys calls The Runcible Riddle their most ambitious project to date. While they’ve been producing site-specific, roving work for nearly ten years through projects like Dead Centre of Town,  Megan says with this production, “We’re moving more audience in more interesting ways than we ever have before. With Dead Centre of Town, the whole audience group moves together at the same time. That’s not the case with this show. Every audience member is going to have a different experience, so the hope is by the time everyone comes back together at the end of the night, they’ll all have different things to tell each other about the show.”

Up to 120 people can see The Runcible Riddle each night (May 13 and 14) and both shows are already over half sold, so make sure you get your ticket early! Tickets are $23.10 and are available through the Citadel Theatre’s box office.

While audiences will follow the cast through the Citadel’s backstage spaces, wheelchair and mobility aid accessible options will be available to audience members requiring them.