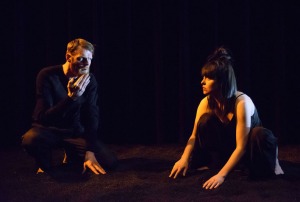 Wish is the retelling of a tragic love story between J.J. – a middle-aged hearing son of deaf parents – and Wish – an 8-year-old gorilla rescued from a company using primates to researching fetal surgery. Wish is a Northern Light Theatre and Good Women Dance Company co-production running until May 7 at the PCL Studio in the ATB Financial Arts Barns.

Wish has been rescued by married animal rights activists with a long history of rescuing animals used for experimentation – Clive is an elderly professor who has studied primates and their similarities to humans, Stella is his adviser and publicist. They start their relationship with J.J. under the pretence of him being a private sign language tutor for their 8-year-old daughter, who can hear, but doesn’t speak. After visiting their remote compound several times, J.J. eventually learns the true identity of Clive and Stella’s ‘daughter’ and agrees to teach her sign language. While Wish is a quick learner – demanding ‘more sign’ over and over again – their relationship grows into something more than teacher-student or human-animal and comes to a conclusion that is both inevitable and tragic.

As J.J., Christopher Schulz shows just how fluid he can be as he changes between six or more characters, each with their own mannerisms, posture and voice. As for his portrayal of his primary character, J.J., I loved the layers Christopher showed in the character – in the beginning of the play he comes off as slightly distant, but through a series of anecdotes and Christopher revealing the person inside that tough exterior, we understand that J.J.’s distance is really a feeling of being apart from this world – never feeling like he belonged in either the hearing world or the deaf world, never really feeling like he even belongs on land, much preferring the water. Dave Clark’s sound design includes amplification of Christopher’s voice that echoes and feels far away – an auditory embodiment of J.J.’s disconnection from this world. Through heartbreaking stories about the embarrassment, rejection and shame that he has experienced, we understand that J.J. has never had friends in the hearing or deaf community and never felt loved, even by his family. In Wish, while the distinction between animal and human is blurred, the division between the deaf community and the hearing community is made very explicit. Through J.J., we experience both community’s rejection of each other, and see J.J. being caught in the unique situation of being rejected by both. 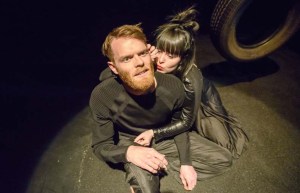 I loved how Adam Tsuyoshi Turnbull’s lighting design augmented both the acting and the costume design. With lights set up at the sides of the playing space which cast shadows on the opposite walls, Christopher’s body language when portraying Clive (the old professor) was transformed by the lighting design. To look at Christopher straight on, he was a little hunched over but definitely appeared as if he was impersonating an old man. Turn your head to the right, though, and check out his shadow which actually looks like an old man. The lighting design also included light coming upwards from the ground to illuminate Christopher’s face, which had the double effect of adding to the off-kilter atmosphere of the play and contributing to the way the script blurs the lines between human and animal.

Ainsley Hillyard’s representation of Wish was wonderful to watch – and no, there’s no gorilla suit involved. Within moments, you forget this is Ainsley and believe her representation of a big gorilla. It’s mind-bending to see both the human and the animal in Ainsley’s performance, and that’s part of what makes this show work so well. I loved the moments when Ainsley tumbled across the stage, her movements a perfect mix of the playfulness and power of an 8-year-old gorilla. In Wish, we also have a being who hasn’t experienced (or doesn’t remember) love and connection. Even amongst other rescued animals in Stella and Clive’s compound, as the only gorilla, she still doesn’t feel like she fits in with her animal or human companions.

While the emotional connection between human and gorilla is at first hard to believe, it is developed masterfully in this production. As J.J., we see Christopher Schulz’s excitement about teaching Wish, at first from a curiosity standpoint about whether primates can learn sign language and then because he can communicate with her and for the first time feels connected and accepted by another being. We see that he can’t stop thinking about her to the point that he is withdrawing from his family and wanting to spend all of his time with her – doesn’t that sound like falling in love?

Of course, the most obvious conversations arising from Wish are regarding animal rights. Where is the line between animal and human? Do animals have rights? How far do those rights extend? But what’s interesting about Wish is the approach the script takes: it’s not the blanket statement that animals have rights and if you agree you’re an ethical person and if you disagree you’re a monster. Wish slowly builds a case for why we should take another look at our beliefs about animal rights. In Wish, we see the title character feel both emotional and physical pain. We see her love. We see her remember. We see her communicate. And so, when J.J. rejects her advances and Wish asks why she and J.J. can’t have sex, she’s not just asking J.J., she’s asking the entire audience and in that moment, where the line between human and animal is blurred, it’s difficult to find the right answer. ‘Because you’re a gorilla’ seems too simple and begs the a flurry of questions. What is a gorilla? What are the things that separate them different than humans? Can animals give consent? How can we agree on some laws that protect animals while allowing experimentation on them (within certain parameters, but the experiments cited in the play and the information I found after the show still sound like torture to me)? The play is certainly not advocating for bestiality, but it’s putting it in sharp relief against the other ways we use and treat animals. And that’s an uncomfortable position to be in.

I’m going to leave the animal rights discussion though because there are a lot of other reviews of Wish that skillfully navigate that topic. Instead, I want to bring up one of the other themes that came to me in the show: the extent to which animal rights activists might go (or have to go) to prove their arguments. Although Clive is against animal testing, is the action of Wish the ultimate animal testing experiment? To see if you can put two individuals who feel alone and disconnected and allow them to develop a connection to prove your points about primates, regardless of the effects on the human? Is this actually a huge publicity stunt that the ‘holier than thou’ couple has put together? If they could create the right conditions for J.J. and Wish to fall in love, culminating in J.J.’s arrest for bestiality (or, as Clive would prefer – sex with a minor), would it allow them to put Wish on the witness stand, proving what they’ve been saying for years about animals being able to communicate, to have emotions and memory and to be able to give consent? Is this the final push animal rights activists need to convince the world that the line between humans and animals (or at least primates) is not as defined as we have established it to be? And would it work? If you’ve seen the movie Ex Machina, you can’t help but make comparisons to the ethical questions Wish also leaves you struggling with.

It’s guaranteed Wish will leave you with a lot of questions, and though it’s an uncomfortable play to watch and react to, it’s a must-see as Edmonton’s theatre season starts winding down. Wish is co-produced by Northern Light Theatre and Good Women Dance Company and runs in the PCL Studio Theatre at the ATB Financial Arts Barns until May 7. Tickets are $23 – $27. There is also a late night booty call performance May 6 at 11:30 p.m. – tickets are $18. On Tuesday, May 3, tickets are two-for-one.

As usual, Northern Light Theatre will be hosting a salon series for Wish. The salon events start with the Director’s Circle with Director Trevor Schmidt and Good Women Dance Collective Saturday, April 30 at 6:15 p.m. Next up is the guest speaker salon on Wednesday, May 4, followed by the Thursday night talk back with actors Ainsley Hillyard and Christopher Schulz on May 5.