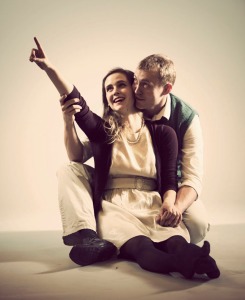 Ursa Major, running until February 7 as part of the Chinook Series, is a story of a couple’s experience of a lifetime of true love. The kind of love where your entire being knows this is the person you’re supposed to be with and, if you’re fortunate, you get to spend most of your life with them.

Written by Megan Dart and directed by her sister Beth Dart, Ursa Major is a poetic fairy tale love story, complete with turns of fate both happy and heartbreaking. The play tells Bea and Barrett’s story of finding their soul mate in one another, building a life together, and how that love is sustained through a car crash that could have broken their relationship. While the fairy tale romance certainly comes through, Megan’s script is careful to remain grounded in reality. Bea and Barrett’s love is ethereal, but the couple also experiences the things of real life, like Jeopardy, mistakes, fights, and children. After the car crash, those realities take over and the idea of love is subsumed within the deeper, more complex idea of devotion and sacrifice of one for the other.

A number of motifs – verbal, physical, and visual – serve to underline the poetry playwright Megan Dart has embedded in the show, while Leif Ingebrigtsen’s score plays gently underneath it all, enhancing the beauty of the entire production. A verbal motif, repeated throughout the show says, “This is an unimaginable story about completely imaginable people,” and goes on to say the who is not important, but the why is. While the play is an homage to the story of Beth and Megan’s grandparents, the play invites the audience to imagine Bea and Barrett as anyone in their own lives who has had or desires a similar love story.

In the roles of Bea and Barrett, Paula Humby and Cliff Kelly perfectly embody that sense of true love that Ursa Major is based upon. As the verbal motif says, they are able to strike that perfect balance between completely relatable, real people, and the extraordinary love and devotion they had to one another, no matter what life threw at them. Both actor’s body language and mannerisms helped convey the time Ursa Major is set in, with the formality of the early 1900s evident in the way they carried themselves and interacted. Their subtle changes in body language and how they carried themselves, along with small costume changes, was also an effective way of communicating the passage of time. Given the fairy tale nature of Ursa Major, Cliff played the part of the prince very well – completely giving in to that sense of enamourment from even the very opening moments of the play. On the other hand, Paula’s character of Bea was not your typical fairy tale princess, but in the best way possible. Paula was fiery, spirited, and straightforward as Bea, which worked as a great contrast to Cliff’s mellow and steadfast Barrett.

While Paula and Cliff swept me away with the relationship between Bea and Barrett later in the play, the opening moments where Bea and Barrett are meeting each other for the first time, seemed to be imbued with a sense of awkwardness between the two actors. The characters fall in love at first sight – it is a fairy tale after all – but it seems as though a bit more time or perhaps different body language could have been used to make the story of their meeting and falling in love seem less awkward and rushed. However, Ainsley Hillyard’s choreography a little later in the show, when Bea and Barrett are dancing while on their first date, perfectly picks up on that very relatable awkwardness of a first date and first physical experience with someone. In this case, the tension between Paula and Cliff is relatable and delightful. As this dance evolves into a physical motif throughout the show and the awkwardness fades away, it becomes a reminder of the couple’s comfort and how in-tune they are with one another.

Further on in the play, Ainsley’s choreography of the car crash scene is very effective in communicating the violence of a car crash within the confines of a theatre, using the actor’s bodies to convey the violence of the crash without disrupting the whimsical beauty in the rest of the show.

Another motif in Ursa Major is that of ‘home’, which is communicated by the script, but has also played effectively into the world projection and set designer Matt Schuurman has created for the play. The set itself is very simple, with a few trees and cabin-style furniture that somehow hide all of the props used in the play, again enforcing the magical element of the show each time a prop appears out of nowhere. Matt’s projections are one of the most breathtaking parts of the show, including beautiful images of a lake augmented by designs and effects that make the lake seem magical and tie back to the play’s fairy tale theme. To help note the passage of time, Matt’s images of the lake subtly change over time, which helps in a one-act production where there isn’t time for significant costume, makeup, or set changes to help the young actors transition from teenagers to people at the ends of their lives. The lake is also the place where Bea and Barrett feel the most at home and connected to one another, and so even when the action of the play shifts to Bea and Barrett’s home or other locations, the projections still incorporate images from the lake in the periphery of the screen, reinforcing the couple’s connection to the lake and each other no matter where they are or what they’re experiencing.

Cheyenne Sykes’ lighting design is as much a part of the set as the vehicle to illuminate it. Through her lighting design, she’s created a night sky which remains constant throughout the play and includes the Ursa Major (or Great Bear) constellation itself. This constant presence of the lights of the heavens evokes the idea of fate that is another motif through the show.

Ursa Major is a poetic show about true love and the courage to stand beside and sacrifice for that soulmate in the face of events you have no control over. The love and attention put into every aspect of this production are obvious, and make for the immersive audience experience Catch the Keys Productions is known for, even if this time it is within the walls of a traditional theatre space.

The world première of Ursa Major runs until February 7 in Studio C at the ATB Financial Arts Barns. It is produced by Workshop West Playwrights’ Theatre in association with Catch the Keys Productions as part of the Canoe Theatre Festival during the Chinook Series.

Tomorrow, January 31 at 5:30 p.m. in Studio C, the Dart sisters will host a discussion with brain injury specialists about brain trauma and recovery as part of the Chinook Series salons. Attend in person or hear the conversation afterwards on the What It Is Podcast.