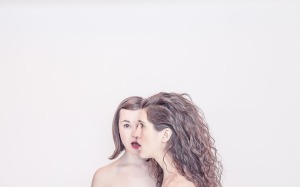 Living as a woman today is complicated, and that’s exactly what Amy Nostbakken and Norah Sadava of Quote Unquote Collective explore through Mouthpiece. The Dora Award-winning Mouthpiece portrays the experience of Cassandra as she moves throughout the day her mother dies and she loses her voice both literally and metaphorically. The show runs February 4, 5, and 6 as part of Canoe Theatre Festival during the Chinook Series.

Amy Nostbakken explains the theme she and Norah wanted to explore through creating Mouthpiece, “I think the main thematic thread is a woman rejecting her mother’s version of being in the world and then upon being in the world and upon reflecting on her own version of being in the world, realizing it’s the same thing wearing a different costume. Without really thinking about what our actions and our words are and how they’re contributing to society, we will never make progress unless we really investigate our own part in how things progress and regress. It’s an invitation for people to stop and really think about what they’re doing. The whole show is this woman having moments where she realizes ‘Oh my God, I just did this’ or ‘I said that and now I’m looking at what that actually is and I’m realizing I’m not who I thought I was.’ Once that lightbulb goes off – a lot of people call it that aha moment – and you start questioning your actions, you can ask, ‘Why do I shave? Why do I cut my hair this way? Why do I wear this? Why do I apologize all the time? Why when a beautiful woman walks in the room, why do I hate her or love her?’ ”

To portray the complexity of Casandra’s experiences and thoughts, Amy and Norah play Cassandra together, Amy explains. “We’re exploring contemporary feminism through following one woman and Norah and I play two halves of her brain. We both play her… To try to communicate the complexities, we needed more than one woman to play one woman.”

Norah Sadava adds, “It’s pretty fluid. When we were creating the piece, we explored each of us having a specific side and sticking to it the whole time, but in our experience of being a human and a woman, that didn’t feel right. It felt too binary. Whereas the back and forth and up and down and constant flipping of the mind that we experience, it felt like we could communicate that better if it was constantly changing, so we kind of switch off in our demeanour and character attitudes throughout the piece… [It’s like] a fracturing of your brain when you’re thinking two things at the same time. Or experiencing something and wanting to react in different ways and not being sure how to move forward.”

Amy and Norah began creating Mouthpiece soon after they met, says Norah, “Amy proposed that she wanted to explore the bond between women and the complexity of the darkness and the beauty of the way women relate to each other.” Inspired by texts written by females from across the ages, Amy says, “Exploring feminism, you obviously look backwards and see how far we’ve come or not come. How very much the same a lot of the things are and how one step forward, two steps back is that dance that feminism is usually playing. We seem to be struggling and reliving the same thing. You read the books written by Gloria Steinem in the 60s or Simone de Beauvoir at the turn of the century and it’s the same. Almost word for word the same struggle I feel as a 32 year old in 2016. I feel the same anger, the same frustration, the same fatigue, of going in circles and circles. That’s not to say we haven’t made giant steps, but it’s frustrating, especially when you look back.”

Amy and Norah say that audience reactions reflect that frustration, no matter their age or gender. Norah explains, “We’ve had women of our mother’s generation come see the show and they were really upset afterwards because they said that they thought it had gotten better for us. They had imagined that by the time their daughters were their age, things would have gotten better. And us expressing that while it’s gotten different, it’s hard to qualify better. There are certain things of course, but that same struggle was pretty devastating for some older women to hear… We’ve had a lot of young people come in and have that realization and going, ‘Oh yeah, oh shit, damn it.’ ”

That strong reaction is not confined to just female audience members, says Amy. “The reaction we get from a lot of men is also quite beautiful. Some men had the kind of reaction, ‘Oh, man, I never realized it was that constant, or that intense.’ Some men are like, ‘I feel that on a human level. There are aspects of this that are so human that I know exactly what that feels like. The splitting of the brain and constant back and forth.’ I think it’s really important for us to include men and not exclude their experience and invite them to understand what ours is.”

Mouthpiece plays at the Westbury Theatre February 4, 5, and 6 as part of Canoe Theatre Festival during the Chinook Series. Tickets are $20 – $25, or you can buy an evening pass to all shows that night for $50 or a Five Pack Festival Pass for $75.

On February 5 at 5:30 p.m. in the ATB Financial Arts Barns Lobby Board Room, there will be a salon hosted by Workshop West in conjunction with Mouthpiece‘s appearance at Canoe about how theatre affects the grieving process.