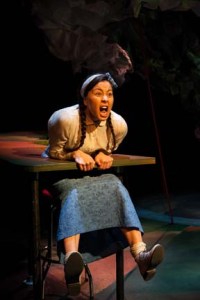 There are a lot of great reasons to see Café Daughter, presented by Workshop West in collaboration with Alberta Aboriginal Performing Arts, running at The Backstage Theatre until December 6.

Maybe because you want to be delighted by actress Tiffany Ayalik’s portrayal of not just the main character, Yvette Wong, but 12 other characters that playwright Kenneth T. Williams has woven into Yvette’s story.

Maybe it’s because you want to stare in awe at one of the most beautiful stages I’ve seen in Edmonton, with an unraveling upside down tipi designed by T. Erin Gruber that serves as the canvas for Erin’s projections and a gorgeous aerial view of Saskatchewan painted by Chantel Fortin.

Maybe it’s because you want to learn more about the inspiration for Yvette Wong and Café Daughter, Senator Dr. Lillian E. Quan Dyck, who overcame the laws, institutions and social attitudes that faced her as a Chinese-Cree woman and forged an inspirational trail of firsts and successes.

Café Daughter is a story of calling yourself back to your identity through memory. The play is a look backwards into the formative years and moments in the life of the fictional character Yvette Wong, who Kenneth T. Williams based on Senator Dr. Lillian E. Quan Dyck.

Set in the 1950s and 60s, Café Daughter takes place in Alistair and Saskatoon, Saskatchewan. Yvette’s father Charlie Wong, a Chinese immigrant, runs the café in Alistair with his wife Katherine, who is Cree. At the time, one of Saskatchewan’s laws forbade businesses run by Chinese people to hire white women, and so Charlie and Katherine’s relationship started through Katherine’s employment at the café and grew into love. We meet Yvette when she is 9 years old, placed in the slow learners class in her small town school because of her heritage and despite her excellent marks and love of learning. Faced by small-town racism and denial of her own identity coming from attending a residential school, Yvette’s mother tells her to never let anyone know about her Aboriginal heritage. Yvette listens to her mother’s instructions for her childhood, but eventually finds she needs to embrace both sides of her identity – Chinese and Cree. Café Daughter is built from Yvette’s memories between the ages of 9 and 16 that she looks back on as she discovers her Cree identity.

Café Daughter is told by an adult remembering back on childhood and adolescent experiences. Kenneth T. Williams’ script, and Workshop West’s production of it, maintains a delicate balance between experiences of racism and discrimination and the levity and strength of conviction which Yvette uses to help her keep pursuing her dream of becoming a doctor. This levity and childhood innocence that Kenneth embedded in the writing of the story and that Tiffany brings to the stage in every aspect of her performance is one of the reasons Café Daughter resonates so strongly. Whether it’s a schoolteacher with the ‘not in my classroom’ attitude, a classmate who agrees the government should be able to regulate relationships between various ethnicities, or a friend who absorbs and repeats the racism the world has shown to her, Café Daughter shows the many ways in which racism and prejudice manifests itself. The pacing that director Lisa C. Ravensbergen has used in this production really allows you to fully experience that childhood excitement to just be alive while still giving the audience enough time to fully absorb the somber moments of the play. The moments when the audience is laughing so hard and experiencing Yvette’s optimism and eagerness to take on the world make the moments where the racism and prejudice of the outside world try to stymie those ambitions that much more sickening.

I do have some questions about the script in terms of not being completely clear where Yvette’s reasons for wanting to be a doctor come from and how she maintains that conviction in the face of many people telling her that it’s not possible or just not going to happen. But, the fact of the matter is that despite the obstacles Yvette stays the course, as did Senator Dr. Lillian E. Quan Dyck.

To talk in specific terms about this production of Café Daughter, I’ll start with how wonderful Tiffany Ayalik is on stage. One-person shows are hard enough, but Café Daughter requires the actress to take on the role not just of the main character, but of all the ancillary characters she encounters in her memories in rapid succession. Tiffany crushed this challenge. Watching her transform between the various characters in Yvette’s life was one of my favourite parts of the show. In particular, I loved how she used her movement to propel her transformation between characters. Whether she was walking across the stage, or using smaller movements as part of her shift between characters, it was a treat to watch. One of my favourite scenes of the play is this beautiful moment Tiffany created in transforming between Yvette’s father scooping up Yvette to comfort her and Yvette curled up in his arms as he did so. 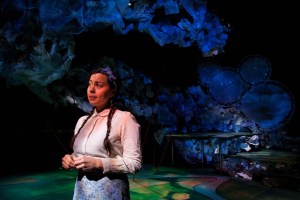 In the role of Yvette, Tiffany brings the sense of joy, excitement, and innocence to the stage. These senses are, of course, in Kenneth’s script as well, but Tiffany owns them. It always requires a little more buy-in when I’m watching an adult play a child on stage, but with Tiffany’s commitment to Yvette’s age and core characteristics, you can’t help but suspend your disbelief and enter into her world.

The world of Café Daughter is beautifully designed by T. Erin Gruber. The focal point of the set is an inverted tipi, with the covering around it unraveling to form the back of the set. This covering, as well as drums hung on the back wall of the set, becomes the canvas across which Erin projects mostly historic images to help set the place and the context of the play. I found the way the background was constructed made it difficult to see the projected images and understand their importance and why they were chosen to be projected on the screen, so the impact of the projections was reduced for me. However, the fluidity of the unraveling tipi covering, combined with a set of three risers that meet the end of the unraveled covering creates a sense of fluidity that reinforces the theme of the play in terms of the fluidity of identity and the fluid-like way Tiffany transforms between characters in the show. These three elements, in addition to Chantel Fortin’s gorgeous aerial view of Saskatchewan painted onto the set floor, also create visual movement and interest throughout the set that makes the space feel much larger than it is.

One piece of the design that felt a little out of place to me was Shawn Gan’s sound design. My expectation coming into the show was that it would include music from the 50s and 60s, which is when the story takes place – and I’ll admit that maybe that was an unfair expectation. However, while Shawn’s sound design definitely increased the tension in the show at key moments and certainly wasn’t anything you’d hear on the radio today, only one piece of music from the time was used. This sound design choice would have worked for me had the costumes and hairstyles not been drawn from the 50s and 60s. With the wardrobe being the only thing really rooting this story in a particular era, somehow both the sound and the costumes were less impactful for me, although perhaps not using period music underlined one of my key takeaways from my interview with Director Lisa C. Ravensbergen and actress Tiffany Ayalik: the events and experiences in Café Daughter are not neatly tucked away in the annals of history, but are still experienced daily.

Café Daughter is a potent look at modern experiences of exploring and claiming one’s identity, especially in the face of racism and prejudice that originally led to hiding that identity. Café Daughter is produced by Workshop West in association with Alberta Aboriginal Performing Arts and plays at The Backstage Theatre until December 6. Tickets are $22.50 – $27 and Wednesdays are pay-what-you-can at the door, or $10 in advance.