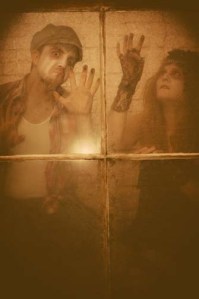 Whether you’re a long-time fan of Dead Centre of Town or have never checked out the spooky October spectacle, Megan Dart – the show’s writer and co-producer – says not to miss this year’s performance. “This year in particular we’re telling more stories than we’ve ever told in one show before… You will see everything from supernatural hauntings to cannibalism to run-ins with plagues that swept the prairies.”

For the uninitiated, Megan describes Dead Centre of Town as, “Sort of a history lesson meets site-specific theatre meets ghost story.” Each year Catch the Keys Productions takes over a historical venue in town, gets to know the building’s history and digs up and creates some spooky stories to thrill audiences. This year’s show is at the 1846 Fort at Fort Edmonton Park, following their successful collaboration with Fort Edmonton Park in 2014 when they took over 1885 Street.

For this year’s show, going back to the fur trade era gives Megan a lot of material to work from. Megan says, “There are so many stories – what’s so interesting is that it was such a different time back then. These people were living in a very harsh land without a lot in terms of resources, but they were so resourceful and so resilient and forged what’s become Edmonton proper… We had a hard time narrowing it down to the stories we wanted to tell because there are just so many to choose from. I think people are going to be really surprised at the stories we’re going to tell. Some of them will be familiar stories told in a new way, but I was overwhelmed with the amount of interesting history that exists in this era. We’re kind of going from 1790 through until the late 1800s. It is kind of the crux of Edmonton’s development in a lot of ways because the Fort was alive and well and it was the last trading post before heading north, but it was its own town – it lived and it breathed and there were some really interesting dynamics in this area.” 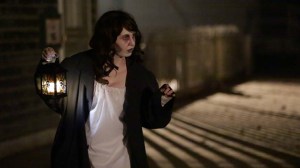 This year Megan says you’ll hear a mix of new takes on familiar stories and stories that you may not have come across before. “You’ll certainly come across historical figures you may have met at the Fort in the past. For instance we’re telling a couple of stories about Chief Factor John Rowand – if you’ve visited in the summer, you’d know him for sure. But we’re really interested in exploring the interesting way in which he died. We’re going to be telling that story, which you might not hear if you were there with your kids. We’re also telling a story about John Welch who was a blacksmith who mysteriously disappeared and we’re going to uncover his whereabouts during the show.”

If you’re a Dead Centre of Town fan, you’ll also see some familiar faces. Megan says several of the cast have been with the production since the beginning – nine years ago. When they counted up everyone’s years of experience with the show a few weeks ago, they had a total of 85 years experience with Dead Centre of Town. “Colin Matty, who plays our narrator will be back this year. We have a group of people who we refer to as our henchpeople that have been with us since the beginning. And we’re doing a different take on the Windigo story we told last year.”

Dead Centre of Town runs October 21 – 24 and 28 – 31. There are several shows each night, but a few nights are sold out already, so get your $20.60 tickets through Fort Edmonton Park early. Catch the Keys warns that the show has been known to make grown men faint and is not for the faint of heart. The show is for age 14 years and up.