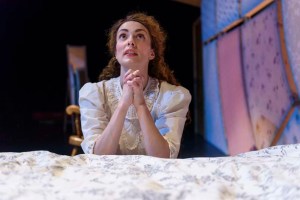 Arielle Rombough in The Good Bride. Photo by Ian Jackson of EPIC PHOTOGRAPHY.

“She’s supposed to be ready with her dress and her bags packed and ready to go everyday from 3:00 p.m. until midnight. That’s difficult to do.” – Arielle Rombough

This is where we find 15-year-old Maranatha Graham in Rosemary Rowe’s The Good Bride, presented by Northern Light Theatre and playing at the PCL Studio October 16 – 24.

Having been raised in the Independent Baptist faith, Maranatha is waiting at her father’s friend’s house for her father to bring her groom Pete to whisk her away to her destiny – to be Pete’s wife. Arielle Rombough, who plays Maranatha, says The Good Bride is, “an examination of what happens to Maranatha while she is waiting, not knowing when her father will show up with her betrothed and when she’s actually going to get married. [She’s been told] to wait between 3:00 p.m. and midnight every night.”

While for some, waiting for 9 hours a day for an indeterminate number of days might seem like a chore, Arielle says it’s not at all for her character. “Maranatha is so, so excited to be a wife. Her upbringing has instilled in her the belief that being a wife is her role with God and that’s the role God wants for her. Also, she’s 15 so she’s kind of boy-crazy, so the fact that she gets to get married right away is pretty exciting, but it’s hard because she’s kept on the edge of waiting for such a long time, it starts to break her down.”

However, as Maranatha’s thoughts wander while she waits, she starts hearing what she’s been told are whispers from Satan. “She has been taught that anything she thinks that is akin to sin according to the King James Bible and the Independent Baptist version of how you interpret it is actually Satan speaking to her. That’s very confusing to feel like you have voices in your head that aren’t yours. I think sometimes that breaks down people’s psyche. They start to fall apart in their minds because they feel like they have multiple personality disorder, but really that’s our own brains… We have thoughts and feelings that come to us by instinct or maybe we’re hearing something we heard repeated to us when we were little or a week ago or yesterday. And it might not be what we even think, we might not even believe that – it doesn’t mean that you’re a bad person. Not to mention that those Satan whispers are things that she’s been told are sins, but a lot of them are pretty harmless things to think.”

To learn more about the Independent Baptist faith her character follows, Arielle’s research involved a dive into her own family history and getting to know the Duggar family (of 19 Kids and Counting fame) – or at least the reality TV version of them. “My nana – my mother’s mother – was actually raised as an Independent Baptist. So she had to wear the very modest clothing and they weren’t allowed to play cards and there are all sorts of things I remember Nana telling me… that was definitely informative to recall that history… I also spent a lot of time with the Duggar family. As much as I didn’t want to – I never watched their shows – I read portions of their books and I watched their vlogs and I watched some of the shows… I watched the episode where their youngest baby Josie, who was born prematurely and almost didn’t make it. In that moment, I saw the humanity behind them. They’re a particularly funny family because not only do they follow this very fundamentalist lifestyle, but they also present themselves for television and want us to believe there’s a certain way that they are. I could tell they were even trying to put on this face for the episode, but they almost lost a child and that is something that transcends faith and political differences that we can all relate to. I think that was something I needed to see to tap into the humanity of Maranatha.”

For Arielle, what The Good Bride does so beautifully is really explores the humanity that transcends any perceived differences people may see when they look at any particular faith. “Rosemary Rowe has brilliantly peeled away these onion layers of the outward appearance of the faith and what that entails and really reveals what this young woman is like at her core. She’s a complex human being… I think [the play will] spark a discussion about what it means to different people to have faith. And that they really have to come by it on their own. Everyone has to follow their own path and figure it out for themselves what feels right… The beautiful thing about this is that it’s a bit of an examination of faith, and in the end it pays a great deal of respect to Christianity and faith and what that can really mean for people. I think it’s helped me find a new appreciation for what that means for others… I have a new respect and appreciation for that, which I’m glad I got to develop through this process.”

And despite sounding very serious, Arielle says The Good Bride has a lot of situational humour. “You combine the reality of a 15-year-old girl, with a fundamentalist faith that’s super restrictive for girls, and she’s stuck in a room every day from 3:00 p.m. to midnight wearing her wedding dress, and waiting on the edge of being someone’s wife and not being part of her other family anymore – leaving her brothers and sisters – and losing her virginity. If you put all of those things together, it’s pretty fucking funny. Because those are extremes – and if you get all of them in one equation, it equals comedy.”