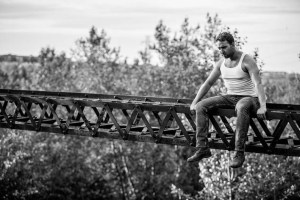 Theatre Yes‘ work is all about risk – whether it’s the subject matter and the conversations it spurs, the way a show is staged, the relationship between the actors and the audience, or anything else that isn’t “safe” theatre, Artistic Director Heather Inglis says, “I think theatre is most exciting when it’s dangerous. Art is most exciting when it’s dangerous. When we move away from that, things stop being as challenging and provocative and so much less interesting. That’s not to say that there aren’t all kinds of approaches to theatre that are valid – I love to laugh – but there’s an important role for artists as agent provocateurs. I would see our company as that. We’ve often chosen pieces that, for a variety of different reasons, that we know won’t get done here.”

To kick off the 2015/2016 theatre season, Theatre Yes is bringing Catherine Banks‘ Bone Cage to La Cité Francophone, September 24 – October 4. Bone Cage tells the story of a group of Nova Scotians, most in their late teens to mid-twenties, who have no choice but to make their living in the resource industry, despite the damage their destruction of nature does to their mental health. Heather further explains, “Nova Scotia seems like a long way from Alberta, and it is literally, but what interests me about the play is Catherine Banks’ investigation of what working in industries that destroy the environment actually does to people psychologically. It’s about the psychological costs of logging and oil and any sort of resource industry to frontline workers. There’s a line we can see straight from Nova Scotia to Alberta because so much of our economy is based on oil, but also logging and coal and a number of different industries. We talk a lot about the oil and what it does and where it goes and how it sustains our economy, all of those things, but we don’t really talk about frontline workers. I think there are a lot of assumptions about them, but I think a lot of us at various points in our lives become caught in the conflict between doing something that we know on some level is wrong or we hate because we need to have a job, we need to live. That conflict of needing to pay the bills and knowing that the way we’re doing that is devastating to the environment, to ourselves on some level, because I think those things are connected. I can’t think of anyone who hasn’t at some point done something they hated because they needed to. How do we negotiate that conflict?”

Our current economic realities make Bone Cage particularly relevant, but Theatre Yes has had this project in the works for a number of years ago. As Heather says, “Bone Cage is a big-ass project. It’s really ambitious. Our company is growing, but it’s a really ambitious project…  We started thinking about this play 3 – 4 years ago because it takes us that long to raise the funds and plan for something this big, with 7 actors on stage. It’s a lot of people and that’s really exciting because we often don’t get to see that in stages that aren’t the really big stages. We started 3-4 years ago and it’s happenstance that it’s being staged in these conditions – nobody knew that the price of oil would fall or there would be all of this scrutiny, or that the NDP would win and all of a sudden we would have [Harper attacking Notley] in the federal election. All of that is happenstance and I hope that the production and the events enrich that conversation that’s becoming quite hot right now.”

If you read Bone Cage in advance of the production, or even if you just look up reviews of previous productions of the play, one thing that’s immediately obvious and unique to a play about this subject matter is how poetic Catherine Banks’ writing is. Heather provides more context into Catherine’s writing, “That is one of the things that’s very distinct about her work – poetic language, the rawness of her characters, the vulnerability of them, and often a sexuality as well… When you talk to her, she believes that people talk in poetic terms when they talk about their lives. What she’s actually trying to write is the poetry of the everyday. It’s quite interesting – the work feels different on the page than when you hear it in the air. One of the things that’s been a joy as we’ve begun to work on the play is just to see how well that lifts. Also, Atlantic Canada is a different kind of animal in terms of speech and the language and how it’s used. It’s interesting because as the actors dialect what sounds like might be hyperbolic or overly flowery language from an Albertan perspective, the words sound less flowery. I suspect that has to do with the strong tradition of poetry and music in Atlantic Canada.”

Of course, that poetic language creates an interesting contrast to the gritty subject matter and issues that the play raises. Through this production, Theatre Yes is heightening the tension inherent in the work by staging the show with a thrust stage that positions the audience very close to the actors. Of this choice, Heather says, “In all of our work, I’m very interested in the notion of intimacy and of actors being very available to audiences in terms of proximity. I think that’s one of the things that theatre has that’s very unique. The actors are in the same room as the audience…The audience will be very close to the actors and because the content is so raw and so razor-sharp, I think it’ll be really exciting for them.”

Bone Cage is going to stir some conversations that probably aren’t had often in Alberta, and Theatre Yes has programmed a number of events and workshops to encourage those conversations. “Opening up a conversation about what mining resources does to people is the central theme of the piece. It’s not going to make everyone happy. Because the conversation is about ‘huh, maybe the act of cutting down trees and killing animals actually hurts us the way soldiers get hurt when they go to war. Let’s look. Does it?’ That’s a conversation that I don’t know I’ve encountered as a person born and raised in Alberta… We’re really excited that we’re able to offer the panels and workshop and that we can have conversations around the play and people don’t have to go home and just talk to their partner or friends about it.The panel discussion that’s on the first weekend is certainly designed to get to the heart of, ‘Okay so this play is set in Nova Scotia, what does this have to do with Alberta? What are the lines that we have to draw? Are we in a different situation? Are we talking about our workers, aside from whether or not they have unions?’ There’s also two opportunities to see Catherine in artist talkbacks. The Wednesday night artist talkback moderated by Stefano Muneroni, which will be myself, Neil Kuefler and Catherine Banks talking about the play from different perspectives. Catherine talking about its inception and Neil and I talking about how it hit the ground here. There’s also a discussion at the university with Catherine – a reading and a public interview in the Timms Centre Lobby. And lastly there’s a storytelling workshop – Bone Cage is a story of very ordinary people, so, how do the stories of ordinary people become tools in which we might be working towards an evolution of our society?”

Bone Cage runs at La Cité Francophone September 24 – October 4 and stars Karina Cox, Murray Cullen, Alyson Dicey, Neil Kuefler, Byron Trevor Martin, Emily Siobhan McCourt, and Andy Northrup. Tickets are $15 – $28 through Tix on the Square or by calling 780.420.1757. The panels and workshop Theatre Yes is putting on as part of Bone Cage are free, and more information on them can be found on Theatre Yes’ website.