Pinniped, and Other Poems by Skye Hyndman 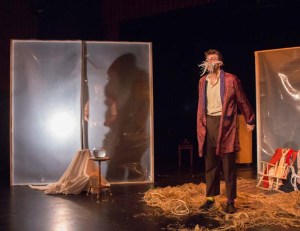 An interview with Philip Geller.

An experimental surreal new work. Strange and confusing. A mix between an art-show, movement piece, poetry performance and honest theatre.

As he ages, J. R. Morse is taking on the characteristics of a walrus. In preparing to accept an award for a book of love poems he did not write, he navigates the fog of his memories and dreams, attempting to reconcile love and logic.

It was an extremely important part of creating what you’ll see at the Fringe. Because this show is new work we have the wonderful ability to go back and edit and edit we did. We received some really important feedback that pushed us in an unexpected direction. Many people expressed their main dislike of the show was that they didn’t understand, the plot and narrative weren’t clear to them. In response we decided that the main difficulty with the show was it walked the line of being a linear plot driven play and piece of art that you can absorb in sections. Instead of adding clarity and making the show plot-driven and linear we messed it up even more. We added dance and more music, the show is now chock-full of images. It’s more like looking at a painting in an art gallery then watching what most call a “play”.

What draws you to surreal plays? Are there different things you consider when directing a surreal play vs. another genre of work?

The ability to create outside of any boundaries. I feel that when working in surrealism I am less limited. I am not obligated to create in any style that is recognizable. Directing a surreal play is like looking at the work through a really warped, scummy lens. Creating truth and honesty is still the foremost goal for me as a director in any and all plays, but with a show that is surreal I look at creating a truth and honesty that perhaps isn’t so recognizable, a truth and honest of a different world.

They are everywhere! They assist in telling the story and creating the atmosphere; they inform and are informed by the characters. The show does not all of a sudden break out into dance or anything like that, the art forms coexist in harmony. They are spattered all over the place and mixed together.

Pinniped and Other Poems will probably be unlike any show you’ve seen in the Fringe. I think we occupy that category of “what the heck is going on, but I like it”.

All of the actors Alex Dawkins, Connor Suart, Emily Howard and Jake  Tkaczyk are all lovely and brilliant. There is original music composed and performed live by Vik Chu, who is a fantastic and talented maestro. Andrea Murphy our magnificent heroic stage manager. And Skye Hyndman who is one of the most unique, intelligent and fantastical playwrights I have ever read, her work is like nothing else I’ve ever seen.