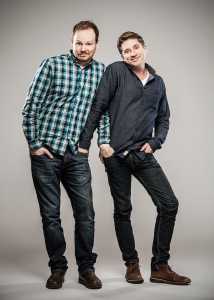 Used with permission from Chris Wilson.

An interview with Chris Wilson.

Chris has a problem in his body. Peter goes into Chris’ body to help! And it’s real medieval-like in there.

You’re bringing Peter n’ Chris Explore Their Bodies back from the archives, what made it a good time to remount this one on the Fringe circuit?

It’s mostly selfish. We just wanted to do the show again. You write a show, tour it for a year and then drop it. And we missed it. And I’m sure some others missed it the first time!

You mention that your comedic duo stretch physical comedy to its limits – how is this done in Peter n’ Chris Explore Their Bodies?

We love playing with perspective shifts and there are many huge mime sequences. We never use any props yet we try to make it as cinematic as possible.

Lots of fantastical dialogue and the use of magic as an excuse to tell the story we want. It’s a pretty goofy one! We also just use lots of the soundtrack.

Now is a great time to see it!