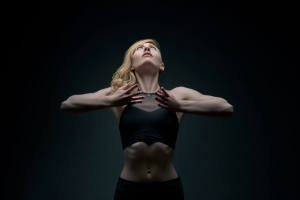 An interview with Leah Paterson.

A community of creatures is confronted with a sudden discovery that shapes the way they view themselves and the world around them. The creators of “Letters and Words” (Sterling nomination for Outstanding Fringe Production) bring you “Self(ish)”, a visually stunning, funny, and poignant exploration of the primal instincts of the self. Self(ish) blends the worlds of dance and theatre to tell a simple, yet powerful story about community and individual identity. There is also a lot of rain, and a very special umbrella.

What does the title of your show, Self(ish) signify?

Self(ish) started out as an exploration of the self — how who we are changes depending on the observer. Since we performed a small excerpt of the show at Nextfest, the piece has evolved into an exploration of community, and how events can shape relationships and our own personal realities. The show has a greater narrative arc this time around, and I think that helps to show the audience the impact of abstract concepts like the self, community, separation, and desire, without being too demonstrative — or even boring.

You describe Self(ish) as exploring “a world where a community of creatures is confronted with a sudden discovery that shapes the way they view themselves and the environment around them.” What creatures are portrayed in the show?

Throughout the entire show the dancers are “creatures”; a bit alien, a bit lizard, a bit cat. I kind of imagine us as a version of “Toothless” from how to train your dragon. I wanted to take a risk this year, and sticking to non-human movement has really pushed me as a choreographer, and the group as actors/dancers. It has also been interesting trying to tell a human story with alien movement, but I think this will give the audience enough space to connect with the story on a primal level. Each cast member has developed their own creature-character, we’re all a little bit different and its been really fun to watch the personalities evolve.

How did you create the choreography for Self(ish)? What were you trying to explore through your movements?

The challenge of creating “creature choreography” has actually opened me up to movement I would never have naturally gravitated towards, which has been so exciting for me. I’ve honestly taken a lot of inspiration from my cat. Most of us have a very strong ballet background, so sometimes it’s hard to break out of that mold. I still want to embrace classical lines and shapes, but I’ve tried to make sure that the steps all belong to the same world. We’re also trying to tell a story, which at the end of the day is the most important thing. Making sure we always know why we’re dancing is super important, and making sure that the dance helps forward the story is something that we’ve worked very hard to achieve.

I want them to know that it’s fun! We don’t take ourselves too seriously, and there are many funny and cute moments in the show. The show has an awesome soundtrack, so even if dance isn’t your thing you should check us out. It’s also short — only 50 minutes long, so you’ll have an easier time fitting it into your fringe schedule!